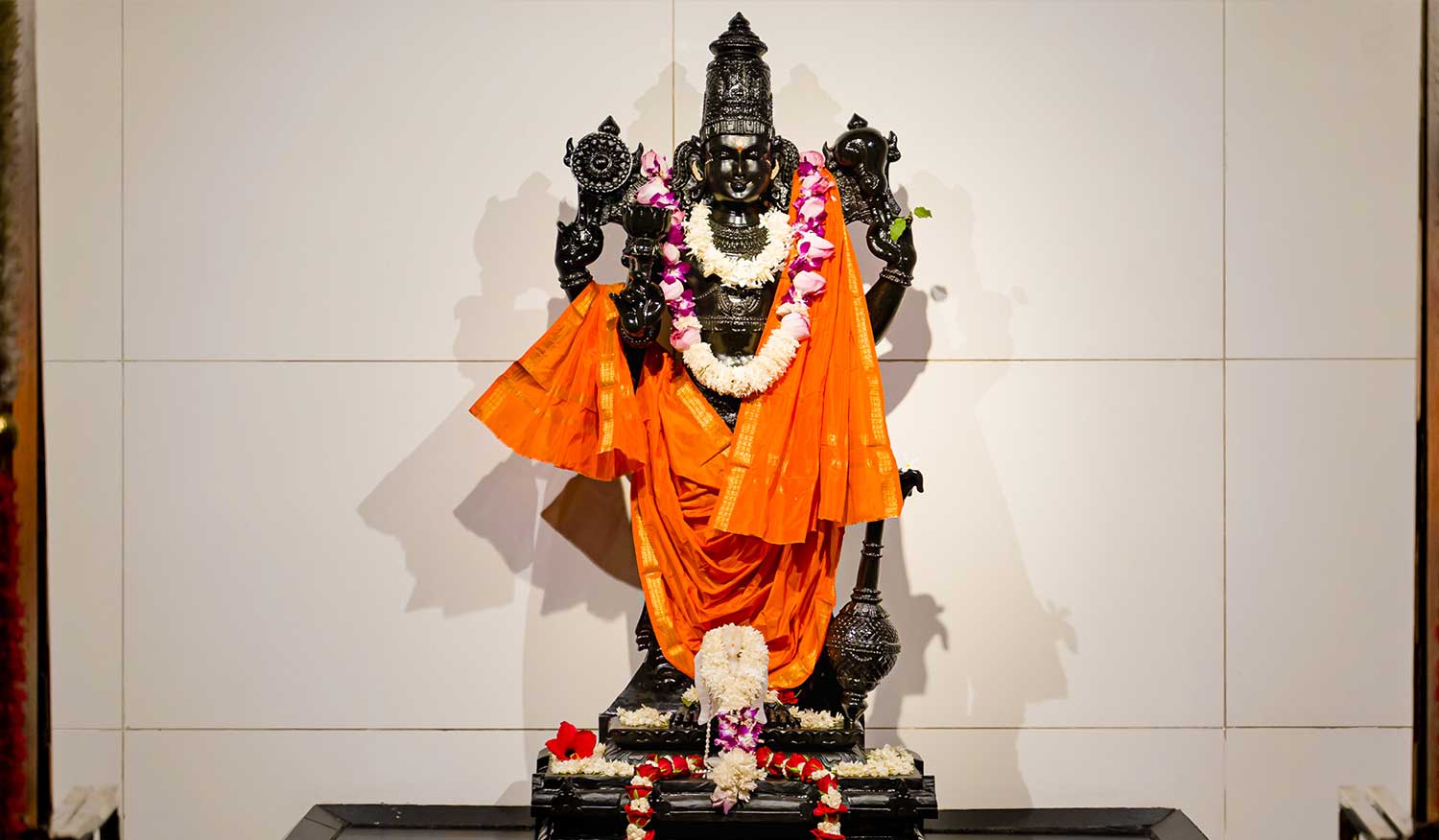 Guru Purnima reminds us that we can’t have the moon, and that, instead, we are to use its light and beauty to enrich our lives. Eventually, a true disciple transitions from the guru outside to the one
inside.  ~ Om Swami

All residents and devotees present in the serene environs of Sri Badrika Ashram celebrated the auspicious occasion of Guru Purnima with joy and devotion. Led by the senior-most renunciant, Ma Shamata Om, each one received the blessed opportunity to express their devotion to their beloved Gurudev by ritually bathing Swamiji’s padukas, anointing them with sandal paste and offering the choicest of bright, fragrant flowers.

Under the benevolent eye of the ever-smiling Sri Hari, soulful shlokas of the ‘Guru Ashtakam’ were reverently recited. As the sun began to set, everyone waited impatiently to behold Swamiji via the live telecast from Sydney.

To the delight of all devotees in Sydney, Australia, Swamiji was present among them this year at Guru Purnima. The temple in Towrang was beautifully decorated and teeming with joyful devotees. The traditional ritual commenced with an invocation by Him to the Divine Mother, which was followed by Guru Pooja.

With utmost humility and shyness, Swamiji asserted that only Bhagwan is worthy of devotion and worship, but keeping in mind the traditional aspect of Guru Purnima and everyone’s sentiments, he gracefully permitted the washing and anointing of His sacred feet with sandal paste and flower petals. There are not enough words to express the bliss experienced by everyone at that sublime moment.

Beginning with his characteristic humour, Swamiji said that the day should be celebrated as Shishya Purnima and not Guru Purnima as it was a joint celebration not only to honor His presence in our lives but also our presence in His. Expressing His deep love and affection for His devotees, Gurudev quoted a Sufi couplet:

(My heart is full of you, your glories, your beauty and your memories. Anything that doesn’t have your light, is irrelevant and meaningless to me!)

Going further, Swamiji exposed the maxim that all relationships are inherently transactional except for one, i.e. between Him and his initiates/devotees. He affirmed that he would always unconditionally accept and love all of us. He took the opportunity to reassure everyone that our well-being is his primary concern and that He is there as a constant anchor to help us realise our tremendous potential!

Swamiji fondly reminisced about His Guru, Naga Baba and revealed the indescribable joy he had experienced by serving him. He gratefully acknowledged that the intense four and a half months of training imparted by his Guru had equipped him to pursue and successfully culminate his spiritual quest in the Himalayas. He attributed his success to His total conviction in His Guru’s instructions and complete surrender at His Guru’s feet.

He lauded the eastern tradition of a guru-disciple bond and pointed to the subtle difference between a teacher and a guru. The former imparted book-based knowledge or insight, and the latter had to entrench himself in truthfulness and authenticity because only a true saint could spontaneously trigger a phenomenal transformation in the disciple.

(Just as the coolness of the autumnal moon quells the heat of the Sharad, autumn season; similarly, the mere vision of a true saint annihilates your sins. It exudes the feeling of safety, security and the exhilarating feeling of coming home.)

He augmented this fact by citing Ramdas (Richard Alpert, a disciple of Neem Karoli Baba), who professed to experience universal love for the first time in the presence of his Guru.

Being true to His word, Swamiji shared the four key mudras of His lineage with everyone as the sequel to the three seed syllables (Beej Mantras) he had shared during last year’s celebration. Based on his personal experience, Swamiji vouched for the absolute power of mudras, which invoke divine energy when you don’t have the time for elaborate procedures. Swamiji compared it to the speed dial option in a phone where contact and connection can be established immediately and encouraged everyone to deploy mudras for rites of consecration, the closing of sadhana and even as grace at meals.

For thousands of years, these 4 core mudras have been practised by the Siddhas and awakened sages of His lineage. They form the basis of advancement on the path of sadhana, especially the Sri Vidya Sadhana, identified in sequence as: Ankusha mudra (Goad), for taming the restless mind; Avgunthan mudra, reminds us that this wheel of samsara is always moving. The energy that you have invoked is now brought to its kinetic form by this mudra. Third is the Yoni mudra, to call upon the Divine Mother and invoke Her energy, and the fourth is Mahayoni mudra, the mudra of closure.

These mudras are symbolic of the four aspects – Dharma, Artha, Kaam and Moksha; the four states of consciousness – Jagrit, Swapna, Sushupta and Turia; the four gunas – Satva, Rajas, Tamas and Gunateet.

Swami Ji encouraged us to use the opportunity presented by Guru Purnima for Self-transformation, to resolve to take on something, and to shun what we want.

(Without a Guru, one can attain neither spiritual knowledge nor salvation. Without a Guru, the ultimate truth is incomprehensible, and one cannot erase one’s errors.)