Why celebrate anything else but the Divine? – Om Swami

The Navdurga Sadhana, two sanyasa initiations, one brahmacharya initiation, a very special discourse – Sri Hari’s birthday this year was one of the most unique since His first, eight years ago.

Preparations for the much-anticipated day were underway by the evening of the 3rd. The temple looked beautiful, replete with an air of celebration, and was choc-a-bloc full with eager devotees by 6:45 AM on the 4th of April. Prompt as always, Swamiji made a graceful entry, beaming, His all-knowing eyes twinkling. 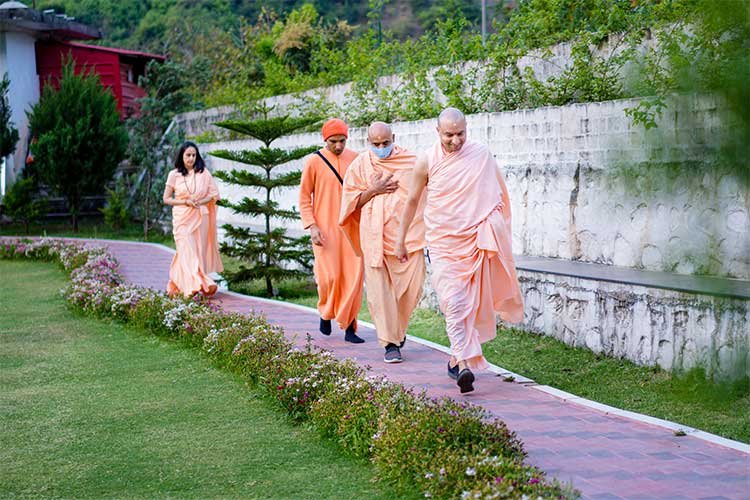 Along with the Sri Hari Aarti, Swamiji led everyone in a chorus of Happy Birthday before singing Sri Hari’s birthday song – Hare Krishna to You, Dear Sri Hari 🙂

The day was all the more memorable because it fell in the middle of the Navdurga Sadhana – the first sadhana at the ashram and a harbinger of many more to come. Swamiji introduced three new initiates – Sadhvi Nishtha Om, Swami Prabhavananda Om and Brahmachari Amit Om. He spoke about them with great love, and how their seva was intertwined with threads of devotion, service, and faith. 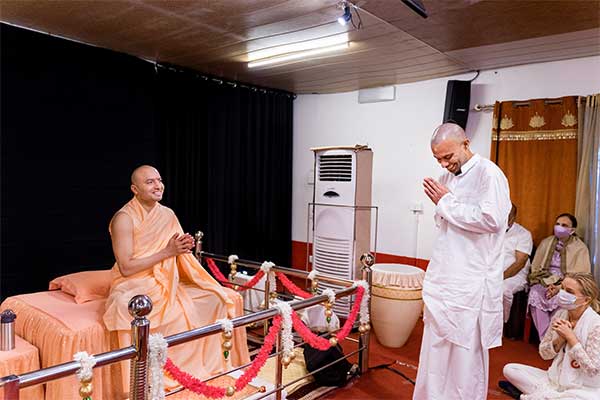 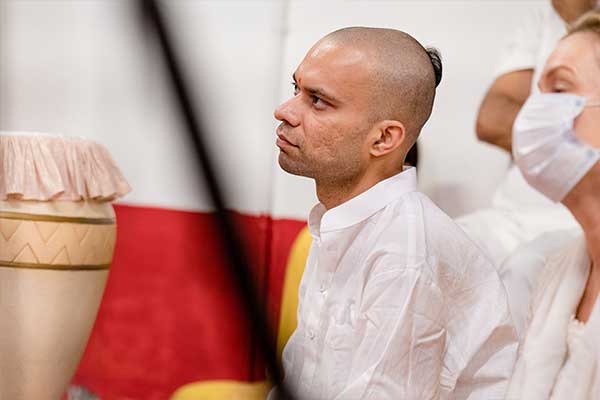 Brahmachari Amit Om has been a devotee for nearly seven years. With the promise of brahmacharya initiation when the time was right, Brahmachariji, as he will be known from now on, waited patiently and served with the utmost diligence. He continues to serve in the ashram administration quietly and meticulously. 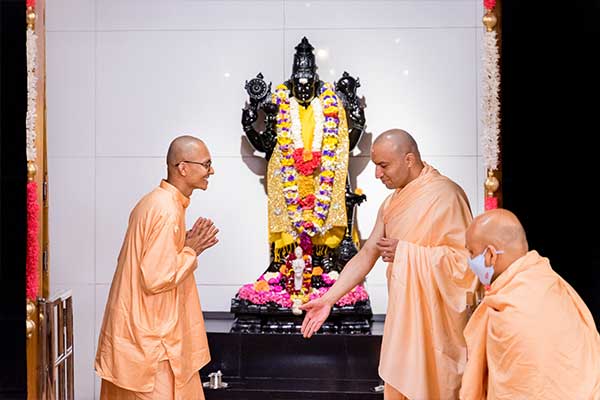 Swami Prabhavananda Om, previously known as Brahmachari Prabhu Om, has been a sevak at the ashram for over three years. He currently manages the ashram kitchen and the sound system for Swamiji’s discourses – challenging roles on the best of days. Prabhu Swamiji, or simply Swamiji, continues to serve with sincerity and a gentle demeanour. Commending him, Swamiji stated that his spirit of service is unparalleled. 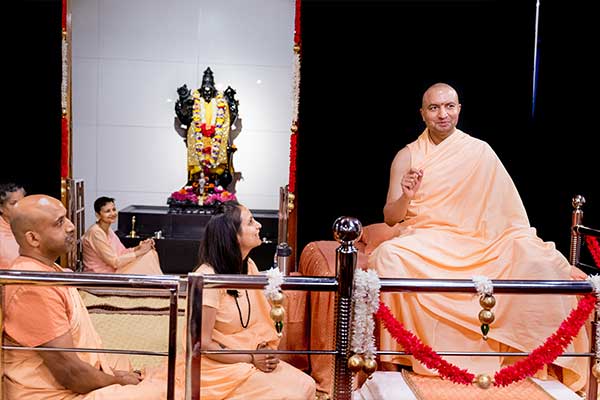 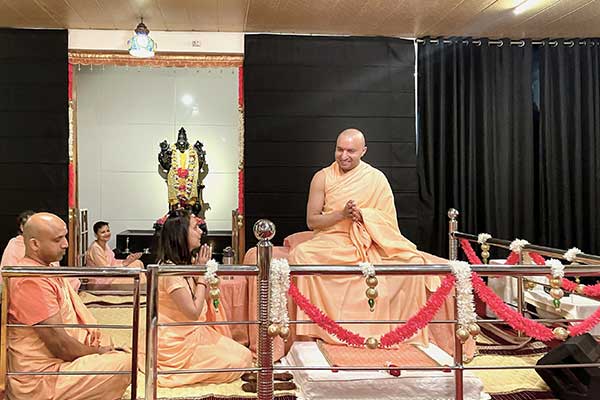 Sadhvi Nishtha Om, previously known as Sushree Nishtha Om, has been a devotee for over a decade. A bhakt (devotee) since Swamiji’s purvashram (pre renunciation) days, she has been in Swamiji’s and the ashram’s service since its inception. Sadhviji, or Sadhvi Nishtha, has conducted herself with grace and dignity during her time at the ashram. Speaking highly of her, He remarked that her diligent service and impeccable conduct had culminated in sanyasa. 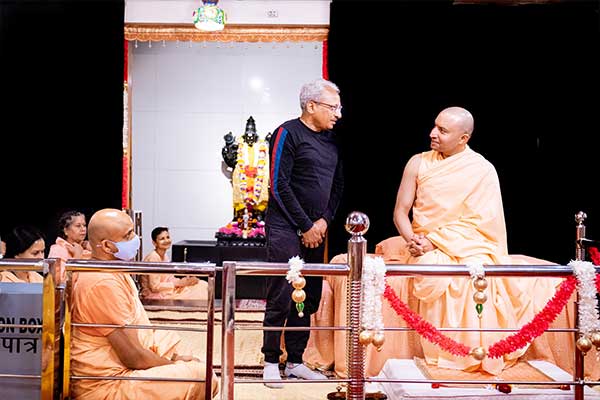 Swamiji also took the opportunity to applaud Rajivji, the ashram administrator, for the phenomenal work he has accomplished in the ashram. With minimal input from Swamiji, he was commended for the rapid development of the ashram infrastructure, the social outreach programs including the recently-launched scholarship scheme, and his team’s hard and dedicated work – all marks of a great leader.

While the three initiates have been given the more direct route of renunciation, Swamiji spoke of another way that would work for most other devotees. Elaborating on the seven-stage initiation process that He follows, he explained that devotees have plenty of chances to change their minds on this route. It is a gradual process, so should they want to opt-out at any stage, they can.

It’s natural for a spiritual seeker to have doubts, question or even disagree with the guru. However, when a devotee reaches the seventh stage, that option no longer exists. The guru’s word is final. Does renunciation (which takes renunciates directly to the seventh stage)  mean that they renounce the world entirely? No, Swamiji explained, as renouncing our karma is impossible. 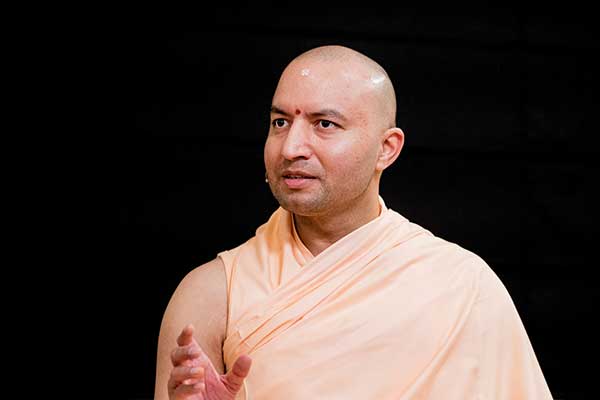 Who then is a sanyasi? A robe or perfect meditative posture does not define a sanyasi. A true sanyasi is equanimous, detached, and lives in and for the world while living above it. A sanyasi’s chief relationship is with God. They seek to merge in Him and Him alone.

The truly exceptional morning concluded with Swamiji narrating two stories from the grand epics of Sanatana Dharma, Ramayana and Mahabharata, that detailed how surrender requires courage and commitment.

True surrender is built over time – slowly, deeply, until every breath is a tribute to our God. Blessing everyone with the devotion of Sri Hari, Swamiji departed, leaving behind full hearts and palpable love

Devotion is the sweetest fruit in the world, and this tree of devotion will sweeten your lives
and the lives of those around you ~ Om Swami

In the end, that’s all that matters.