Mohini moved coyly. Her decolletage shimmered as she delicately held the beaker of amrit in one hand and adjusted her diaphanous attire with the other. The asuras (demons) stared open-mouthed, their minds lost to lust and Mohini’s enchanting beauty.

She was the most beautiful woman in existence. And they didn’t stand a chance.

The elixir of immortality hovered before them, glistening in the beaker that Mohini was presumably pouring from. Each of them awaited their turn, only too willing to allow this goddess of enchantment to distribute the nectar evenly.

No. The asuras were beyond all rational thought. They were held tight by the universe’s first femme fatale. All of them except one. Rahu.
He noticed her game and understood what she was doing. So, he quietly slipped away, transformed himself into a deva (demi-god), and joined the line of demi-gods for whom Mohini was saving the nectar. As she arrived in front of the devas, he extended himself eagerly, reaching out. Mohini poured, and a couple of the demi-gods noticed.
“He’s not a real deva!”
Mohini quickly retracted the beaker, but it was too late. Swiftly, she drew her Sudarshana Chakra and decapitated him. Rahu’s head flew. But he was already immortal.

Quickly distributing the rest of the nectar amongst the devas, Mohini disappeared long before the asuras realized they had been tricked – by Lord Vishnu, in his only female avatara.

Lord Shiva heard of this little incident and was astounded. Lord Vishnu taking on an avatara, and he did not know about it? One that he did not see, especially a form as enchanting as this? Was she really that beautiful? He had to know. He had to see.

And so, taking Ma Parvati along, he arrived at Lord Vishnu’s abode. “What’s this I hear of you taking on an avatara that I’ve not been privy to? I must see for myself. Pray, reveal that aspect of you.” Lord Vishnu smiled. “You will not be able to resist. And such a union will only be unfruitful.”

But Lord Shiva would not hear of it. Despite the repeated gentle refusals from Lord Vishnu, Lord Shiva remained adamant. He had to see Mohini.

Finally, Lord Vishnu acquiesced. “But don’t say I didn’t warn you.” And before his eyes, Lord Vishnu disappeared. In his place stood the enchantress, the seductress, the original woman, Mohini.

Lord Shiva didn’t stand a chance. His emotions drove him wild, and he chased after Mohini, maddened, sightless to anything but her, even as Ma Parvati looked on. As he ran, his seed fell to the earth. And he grabbed Mohini.

Harihara – the avatara of Lord Shiva and Lord Vishnu from this coupling arose as one. 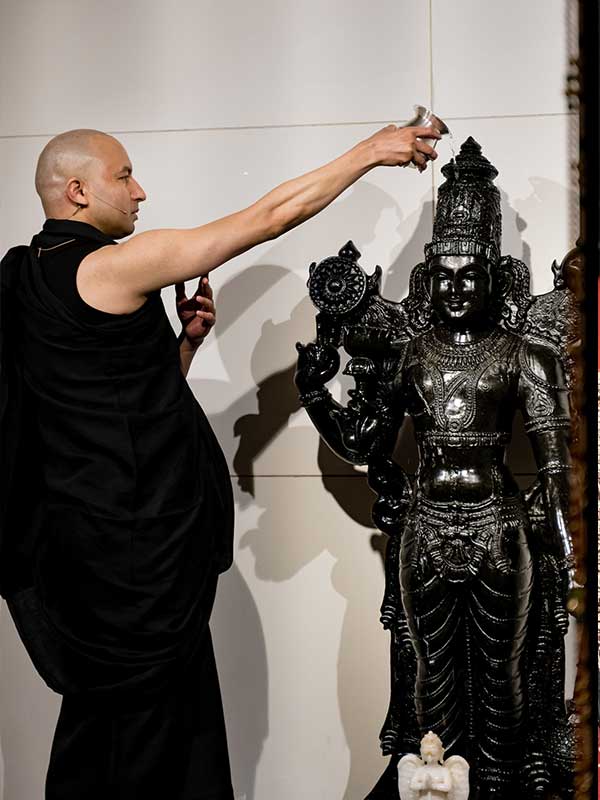 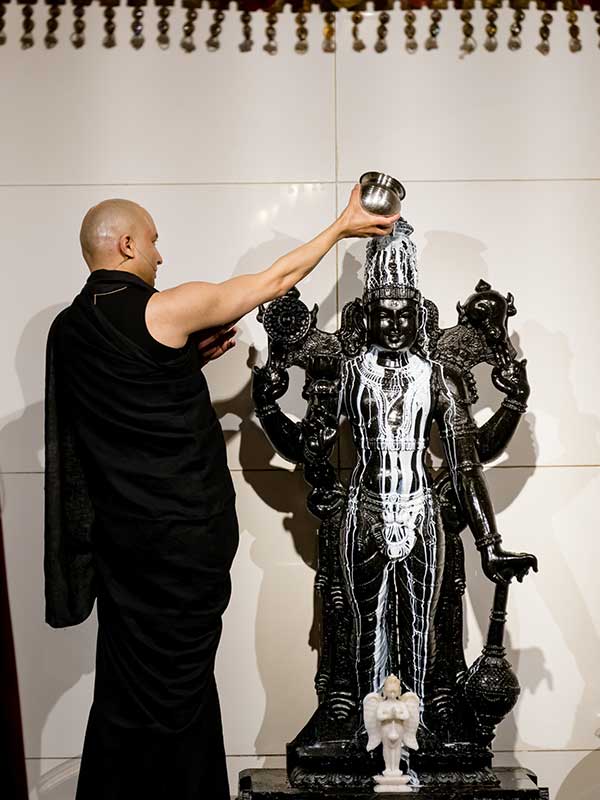 It is this version of Bhagavan Vishnu that comes alive every year at Sri Badrika Ashram. And it is the above tale that Swamiji narrated in His discourse, just 24 hours after he had walked about the garba griha, majestic in His black-robed avatara, amidst billowing clouds of holy ash, kumkum, haldi and hundreds of rudraksh malas as He bathed, smeared and adorned Sri Hari with his love. Just like every Shivratri at the ashram since 2018. 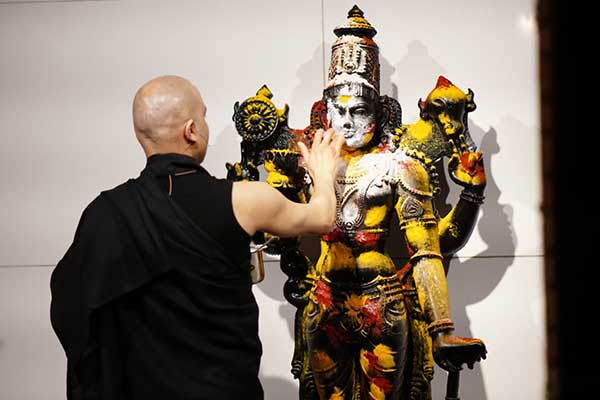 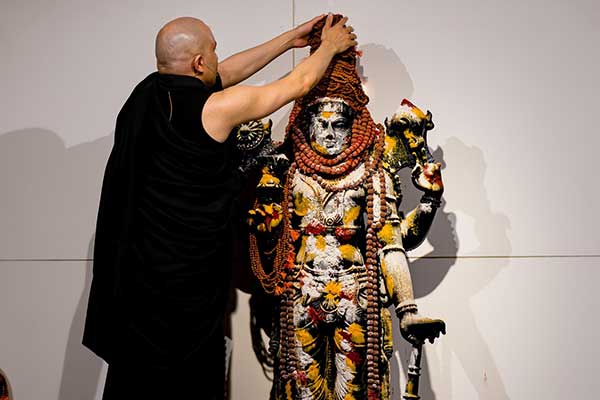 With the ashram officially open once more, devotees arrived at the ashram in droves this year. And just like every year, the buzz around the temple, around the ashram itself, was palpable as devotees waited for Sri Hari’s transformation.

Shivratri 2022 was made all the more special because Swamiji chose that day to launch the Sadhana App. A marvellous, mystical and life-changing app for sincere seekers, it is the result of Swamiji’s penance over the last two years. Swamiji says that the hours He has put into the app are second only to His final sadhana ten years ago when he was blessed with the vision of Mother Divine.

In a very noteworthy discourse after the abhishekam, Swamiji elaborated, with characteristic humour on the practical aspects of the app – how He put together a team over months, found developers, designers and operating heads while working out the specifics of the app itself. His initial vision was put into a 300-page document where He detailed the deities, the abodes and the experiences he wanted the seeker to have – from doing Japa to performing Yajnas and Abhishekams to the primary purpose of the app – Sadhana. 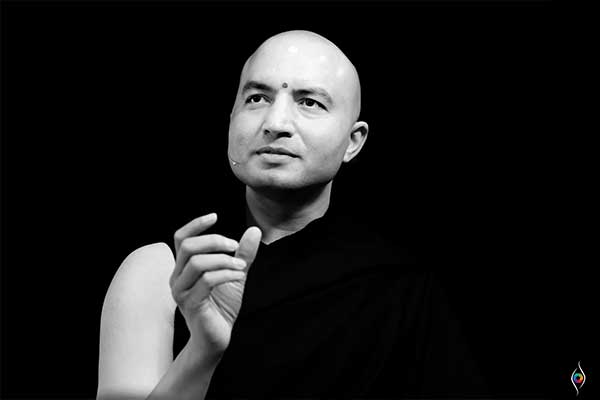 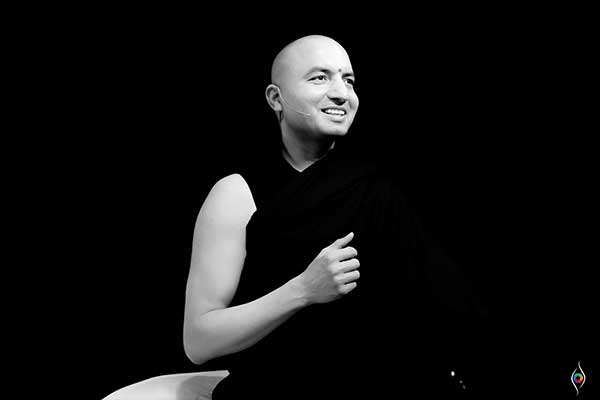 The evening drew to a close with a touching question from a devotee. “Swamiji, how do you heal those who come to you in pain?”
Swamiji stated that he never purports to heal anybody.
“It’s not that you take someone’s pain, blow on it, and it dissipates. It must find a place elsewhere. Nature has a place for everything.”

In the end, He said, it is very simple. “I feel your pain so intensely that it disappears. My feeling is your healing.” 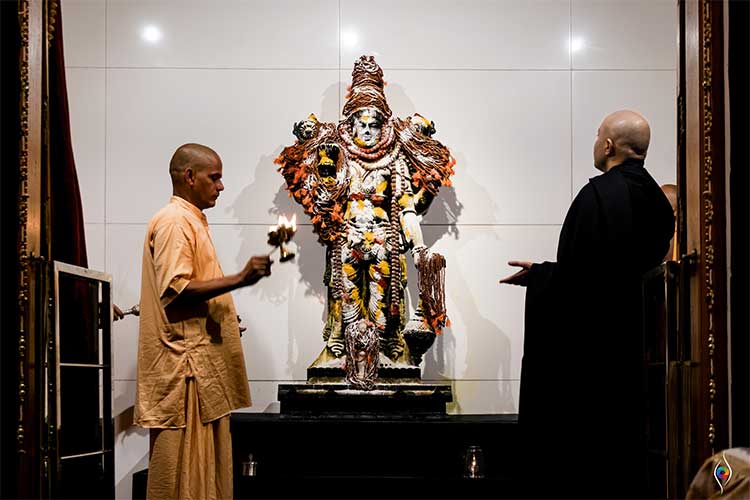 When the clouds of ash settled, Swamiji had gracefully, magically transformed Sri Hari into the majestic Lord Mahadev, who stood before the devotees’ awe-struck gaze, while witnessing the sustainer and destroyer become one – creating a new reality. And that was Shivratri 2022 – being healed beyond imagination from the pain and destruction of the past two years.

For us, for the world. For mankind.