The ashram buzzed with activity that morning, as devotees and volunteers completed one final dress rehearsal of a master plan that had developed over weeks. The spirit of Swamiji guided every action and interaction. The goal was to ensure that every visitor, whether dignitaries, local officials, devotees, or villagers, felt the divine love of Sri Hari and Swamiji before leaving the ashram. 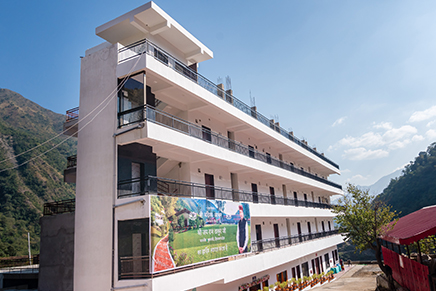 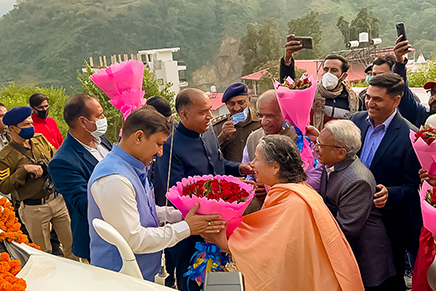 The entire ashram was decorated with bright tents and gates with cascading garlands and a multitude of flowers. One could see the pristine white meditation hall blushing under the setting sun, as the CM and his team arrived at 4:15 PM. Both the minister and his wife paid their obeisance to Sri Hari and spent some time in a personal meeting with Swamiji. 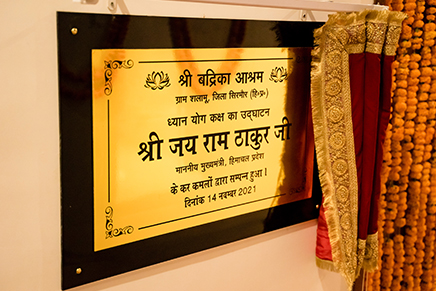 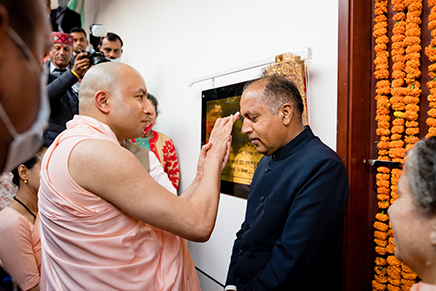 In the meantime, a steady stream of excited villagers, local officials and residents took their seats in the meditation hall. Swamiji soon joined them and led the chants of Sri Hari Bhagwan Ki Jai as Shri Jairam Thakur pulled the curtain and inaugurated the Divya Dhyan Yog Kaksh. 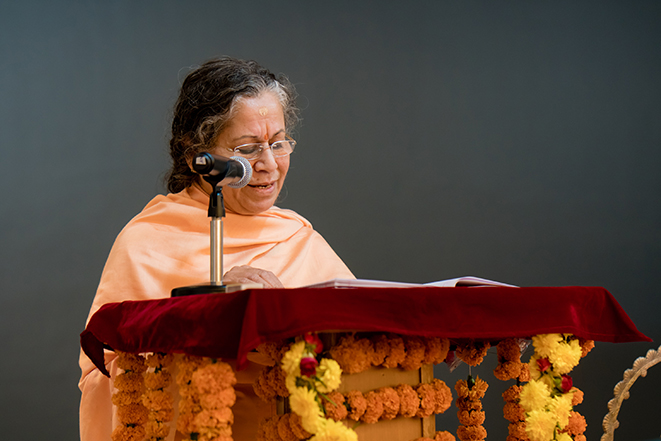 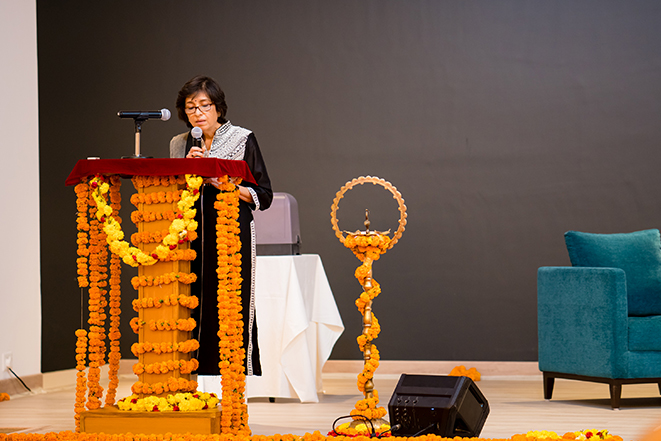 Shamata Ma officially launched the event by welcoming everyone with a few lines of Hindi poetry. Her gentle and soothing voice had everyone’s attention as she welcomed them to this joyous celebration.

She then handed the floor to Sujataji, who walked the audience through a visual journey of Sri Badrika Ashram. While volunteers and residents enjoyed a jog down the memory lane, newcomers in the audience listened spellbound to the history of the ashram and Swamiji. The compelling pictures accompanying her commentary mesmerised the audience who could not tear their eyes away from the screen as they witnessed Amit, the radiant and devotional teenager, transform into Om Swami. It was surreal to sit in a world-class meditation hall, and see how the ashram had begun with limited water and electricity supply. 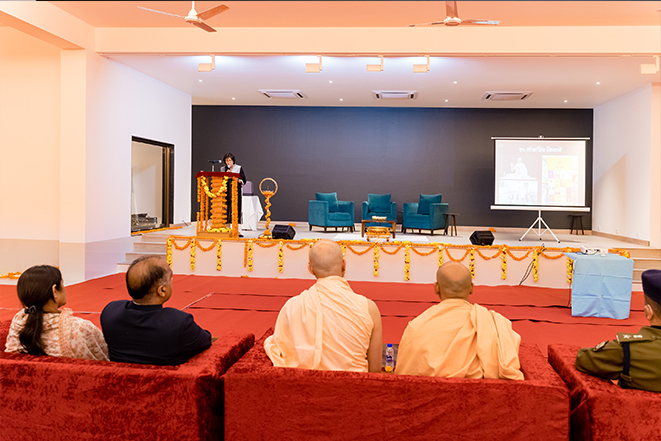 The presentation reminded everyone that the ashram, a non-profit organization, also contributed to the development of Himachal Pradesh. The Chief Minister and his team nodded in appreciation when they heard about the Sri Badrika Ashram Emerging Youth Scholarship Scheme, the distribution of digital devices to students during the COVID-19 pandemic, and the setting up of the Gaushala in 2017. The villagers clapped enthusiastically for the charitable Sri Hari Chikitsa Kendra and the four Silai Kendras or stitching centres, from which many had benefited directly. 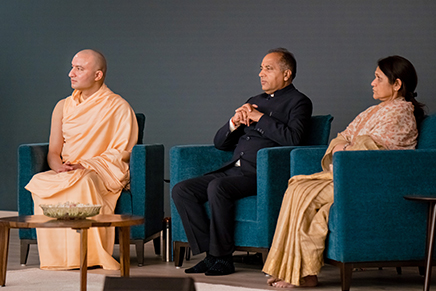 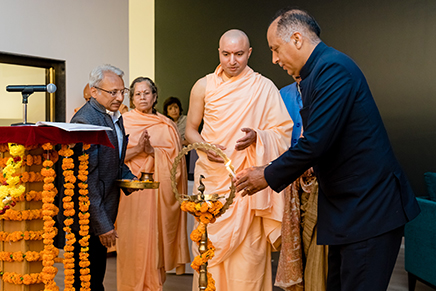 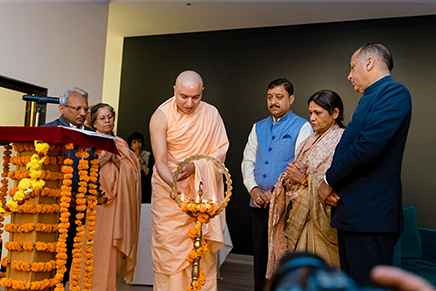 Shamata Ma then took charge and invited Swamiji, Shri Jairam Thakur, and his wife, Dr Sadhana, to light the ceremonial lamp. The dignitaries lit the beautiful peacock lamp to Swamiji’s chanting, and the flames sprang up in response to His divine words. The silence that enveloped the hall was electric as Swamiji completed His prayer and everyone soaked in the spiritual vibrations. It took a few seconds for the spell to break with the thunderous applause that erupted and continued for the next few minutes as Swamiji facilitated the dignitaries with a shawl and a ceremonial cap. 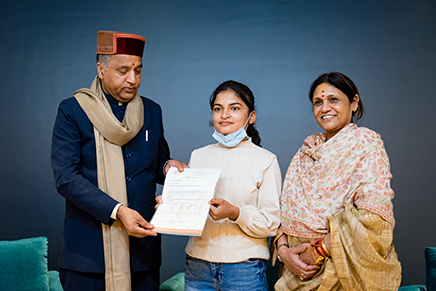 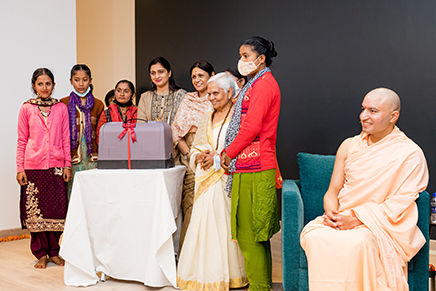 Sujataji then took over the proceedings and discussed the Sri Badrika Ashram Emerging Youth Scholarship Scheme, launched in July 2021.  Most attendees were visibly surprised to learn that the ashram has signed MOUs with key universities in Himachal Pradesh and contributed Rs 65 lakhs for 86 deserving students who hailed from families below the poverty line. This scholarship scheme is already the largest in Himachal Pradesh, of which 80% recipients are girls. Two students, Kavita and Sheetal, were invited on stage to receive their scholarship from the CM, who congratulated them and wished them all success.

The event continued with Shamata Ma discussing the achievements of the Silai Kendra and inviting Dr Sadhana to present sewing machines to the village seamstresses. 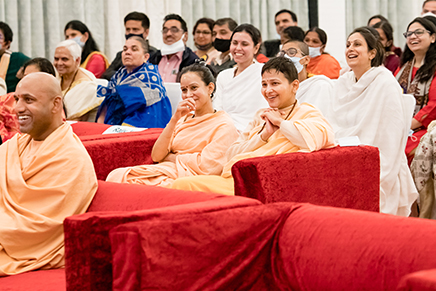 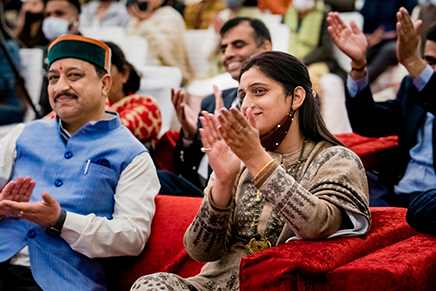 The hall went from thundering applause to pin-drop silence as Swamiji stood up to address the audience. He started with a shloka and explained that the Divine comes to a particular place, based on only His (Bhagwan’s) wish. No single person has enough might to summon the Divine. He added that while he had travelled the world, there was only one country that could take a true seeker to his final destination. That’s the reason why the holy land of Himachal Pradesh in India became home to Sri Hari Bhagwan. 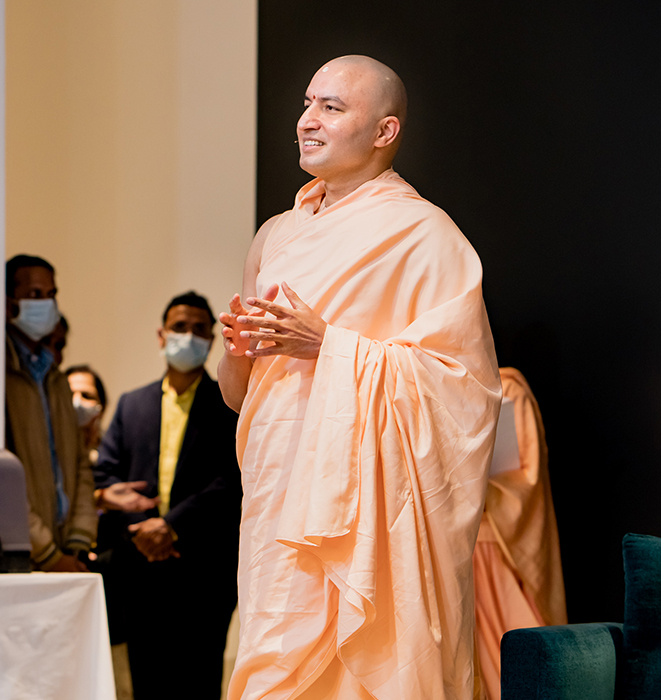 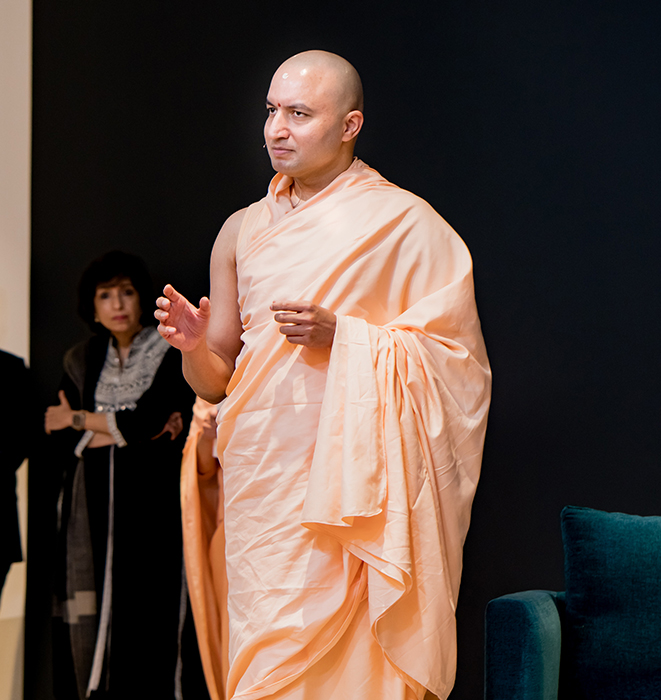 Swami then narrated the story of how an astrologer had seen the Buddha’s footsteps and followed him to a grove. He then expressed his surprise and told the Buddha that his footsteps clearly showed all signs of him being an emperor and a master to infinite material belongings. Buddha smiled and replied that he had no material possessions. The astrologer reiterated that the footsteps indicated no lack in life. Buddha’s smile widened as he said, “Tathagat may not have many possessions, but he is never short of resources.” The audience took in the profound words as Swamiji explained that this was the philosophy of Sri Badrika Ashram, too. He concluded by saying, “We never went and asked for anything but got everything we needed to develop the ashram and the region.” 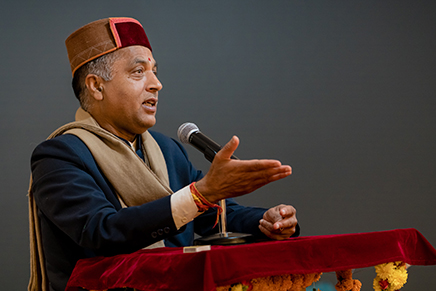 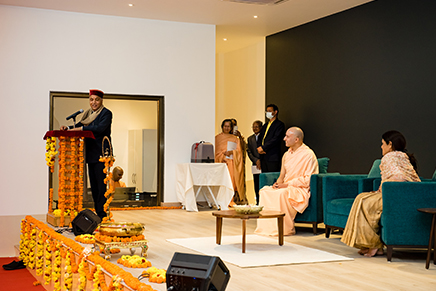 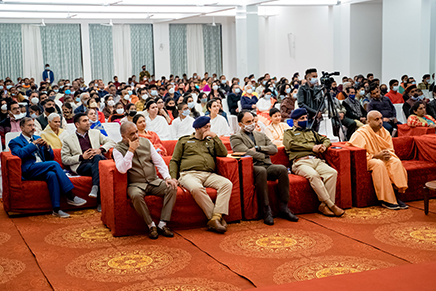 Shri Jairam Thakur gave the final speech of the evening. He mentioned how he had been planning to visit the ashram for a long time and was fortunate to have Sri Hari’s and Swamiji’s darshan that day. The audience laughed appreciatively when he mentioned that he had planned a short trip and had asked his helicopter to wait but had then spent more than two hours in the ashram. 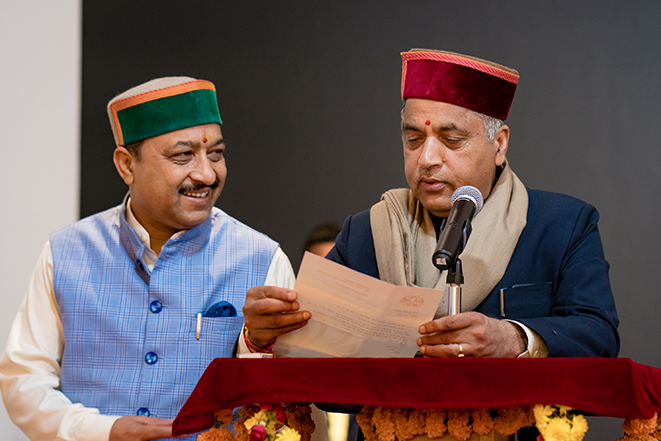 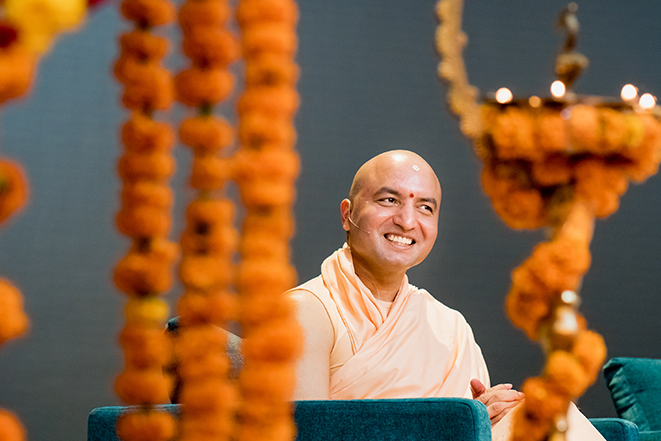 The CM spoke with pride about the ashram coming up in the sacred land of Himachal Pradesh, nestled in a valley alongside the river Giri Ganga. He also briefly spoke of the challenges of dealing with negativity in political life, especially on social media, and how he planned to implement Swamiji’s advice of ignoring comments and simply focusing on development. Everyone applauded the CM as he committed to improving the road to the ashram and upgrading the status of a middle school in the district. 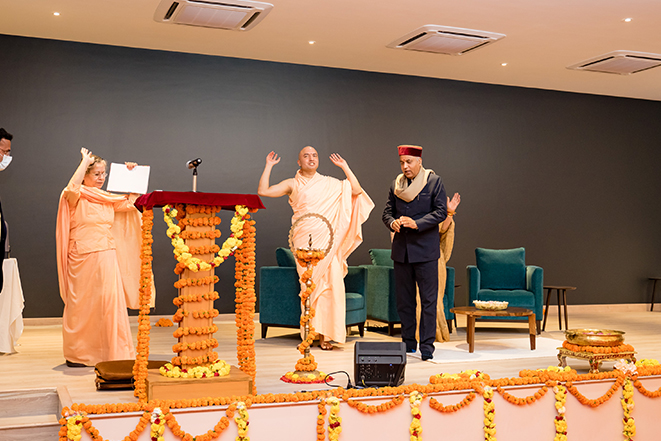 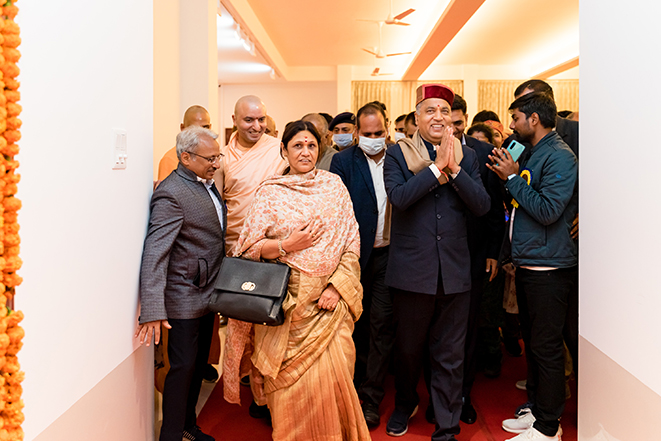 The event concluded with Swamiji escorting all the visitors to the rear gate of the Sri Hari temple. He stayed back to bless everyone who came that way, under the cool moonlight that had by then descended upon the Ashram, before making his way, briskly back to his cottage.