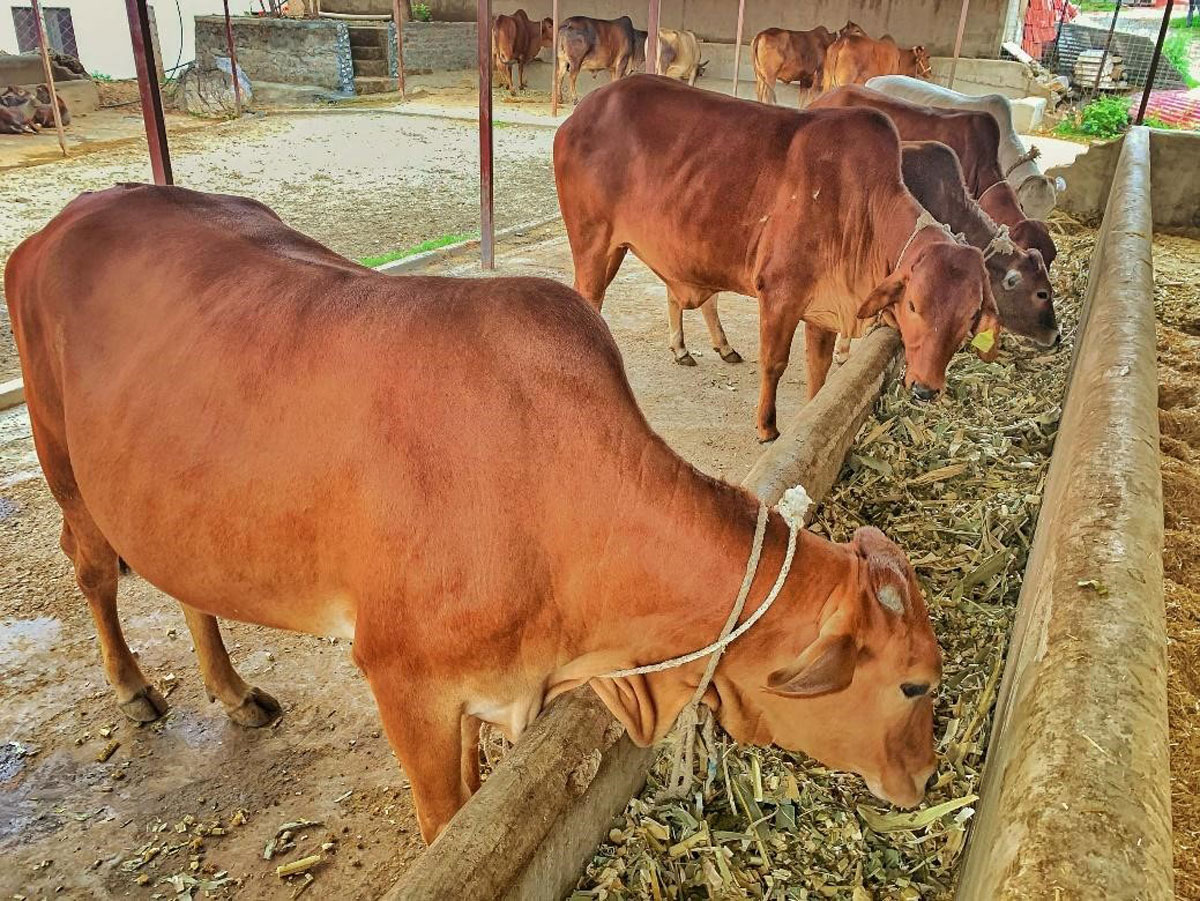 The evening air reverberated with the sound of the conch shell as a prelude to Bhagwan’s soulful and joyous Aarti. Over the residents’ shy singing was another voice – a louder, distressed voice calling out to Him. It came from the gaushala.

After the Aarti, a few worried residents rushed to the cowshed and found Nirmala, one of the oldest cows, mooing sporadically and painfully. She was one of the first ten cows to be brought to the ashram when the gaushala was opened in 2016. On a gloomy rain-filled March 17th evening, Shamata Ma, one of Swamiji’s foremost disciples, oversaw their arrival. She sat alongside the driver of the small truck that transported the cows from Nalagarh, a town nearby, to their new home in Bhagwan’s abode. They travelled for hours along muddy roads and the treacherous paths leading to the ashram.

Thunderous conch shells marked their entry into the ashram. To the melody of the evening Aarti, the cows made their way to the gaushala, which was then a single long room with individual troughs. It is the same barn that is used today as their resting place for the night. And it is this same barn that the residents found Nirmala in now, calling out loudly, clearly in distress.

Despite a thorough examination, they were unable to understand what was bothering her. Her stomach seemed unusually distended. They decided to call Jagmohanji, the ashram-employed cowherd and unofficial vet. Meanwhile, they tried to soothe her, singing and petting, staying close so that she knew she was not alone. She is, after all, one of the cows named by Swamiji himself.

The evening they arrived, five years ago, Swamiji had made his way to the cowshed and lovingly fed them puri-halwa (sweet Halwa made of semolina, and the savoury Puri, a fried flatbread). It was decided that a naamkaran (naming) ceremony would be held in 10 days, where each cow would be named by him. For the cows to be outside in the day, a pen with fencing was also constructed before the ceremony. He teasingly called it “the cows’ playground”.

But before the naamkaran could take place, just a day after the cows’ arrival, Swamiji arrived at the gaushala at 1:00 AM, not for a stroll, but on receiving a call; a distress call from gaumata (the sacred cow). “We aren’t able to sleep,” they complained to him, as he came towards the hall. “We are tired, we want to rest but there is too much light in this room, and it is disturbing us”.

Unfortunately, he couldn’t enter the gaushala to turn off the lights as the door had been locked. Swamiji went back to his cottage, but could not sleep sensing her discomfort. Instead, he did complete research on the sleeping pattern of cows, and how much light is required for their optimal rest. The next day, strict instructions were doled out that the lights be turned off every evening, and everything possible be done to ensure their comfort. Surprise visits by him happened on various nights, often when pitch dark, to make sure they were well.

They were fed, let out for the day, and were looked after dutifully by the ashram’s help. Under Swamiji’s explicit mandate, nary a hand or stick was laid upon the cows. Their only form of communication and care was love. Later, a sound system was set up for them to listen to Bhagwan’s bhajans and instrumental flute music as they grazed. 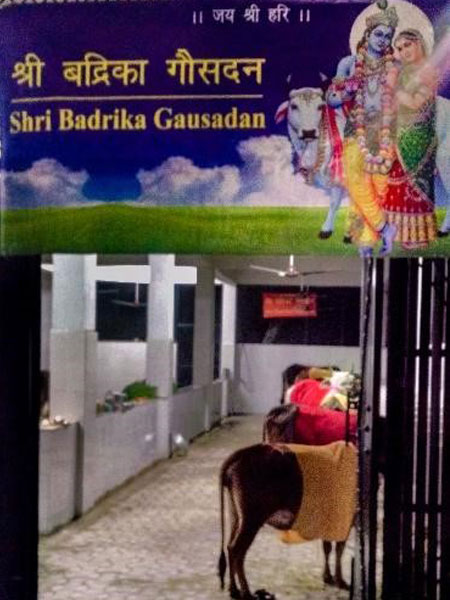 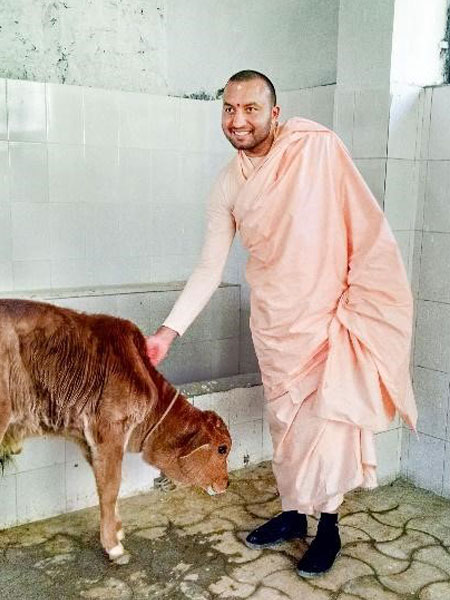 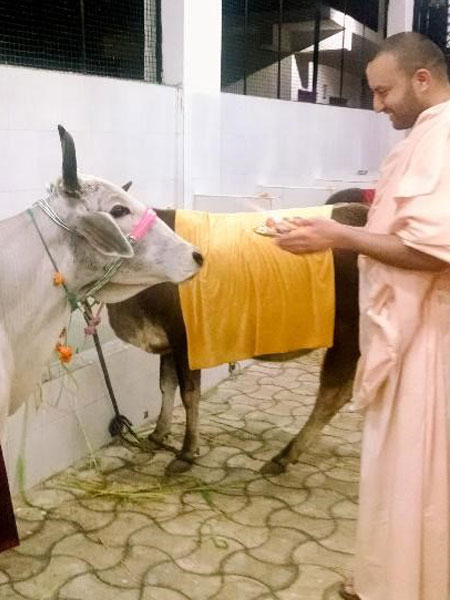 When the day of the naamkaran arrived, the gaushala was festively done up with rangolis and banners. The cows were dressed in decorative vastras (clothes). On Swamiji’s arrival, a small yagna was performed, post which he did the aarti and sprinkled flowers on each cow, bestowing them their respective names – Nirmala, Shivdhuti, Twarita, Kapila, Yamuna, and more. They were fed  jaggery and bananas, as prasadam. 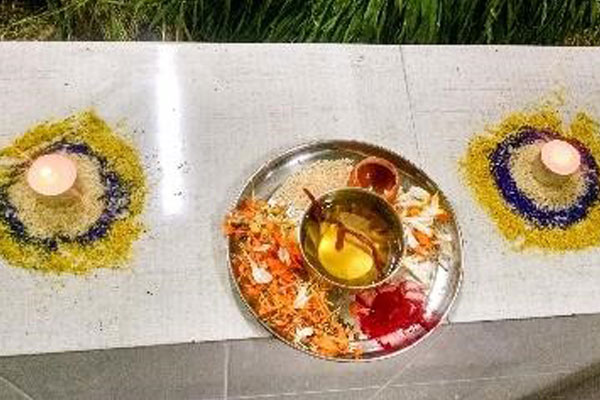 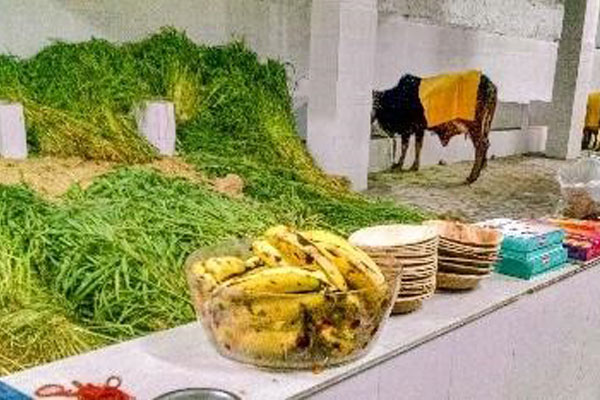 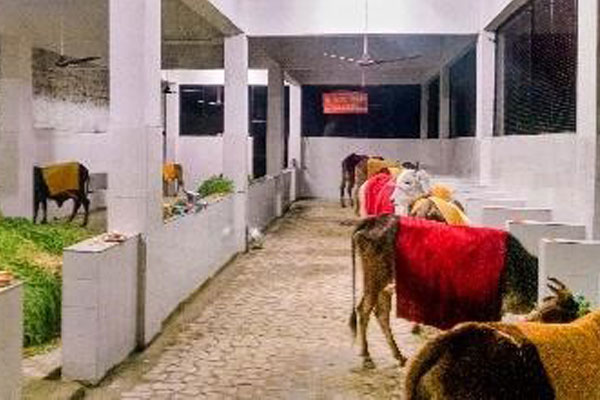 (Cut to today)Finally, at 9:00 PM, Jagmohanji arrives. By now, Nirmala’s moos have become constant and rhythmic. She is one of the older cows, after all. Could this be the end of the road for her?

The worried residents pace back and forth outside the gaushala as he tends to her lovingly. When she spots him and feels his touch, she calms down instantly. He emerges a few minutes later, wiping his hands on his worn kurta.

“Nothing to worry,” he says smilingly. “She’s just on her period.”

The relief! And the surprise! Can cows really go through hormonal pain?

“Of course,” he says. “They have their own mood swings too, just like human women.”

To the ashram sevaks who spend their days in the gaushala tending to the needs of gaumata, this is abundantly clear.

Every embodiment of gaumata has a distinct personality. Sushree Diya Om is one of the ashram’s resident gau sevaks(volunteers at the gaushala). “Radhaji loves being stroked like a cat while Kapilaji loves a full body massage,” she narrates. “Jayaji is small and short, but loves food! When she was a baby, she figured out how to jump into the big cows’ troughs so that she could eat more food in one go! Shivdhutiji is the most gentle and timid of the lot. She’s even afraid of water. Yamunaji is the moody one – some days, she wants to be brushed and on other days, she gives you the brush off!”

Twarita is the cow who carries emotional baggage. Abused by her previous owners and branded on her face and body before coming to the ashram, she doesn’t trust human beings. She keeps to herself and takes a long time to open up to people.

All of them respond uniformly to one thing – food given with love. Karunaji, another resident gau sevak, along with Padamji (an ashram employee), arranges for the regular delivery of seasonal fresh fruit and vegetables, thanks to the generous contributions of donors. Every morning, they cut up greens, oranges, carrots, bottle gourds, or whatever is available for the day, and make their way to the gaushala to feed them, play with them and brush them. As soon as they spot Karunaji, all of them respond, standing up eagerly and looking at her expectantly. They snuggle into her loving arms as she feeds them. Even Twarita has, slowly and gradually, allowed herself to be stroked and brushed. 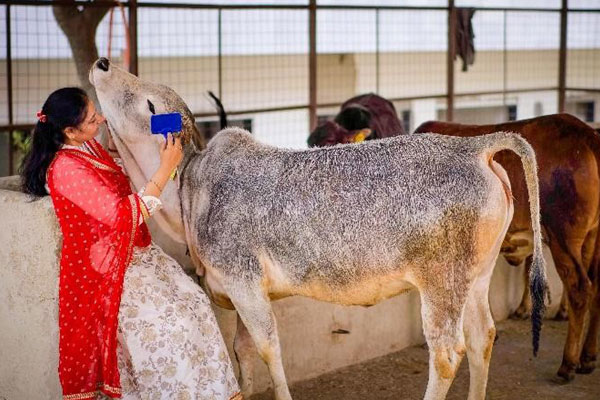 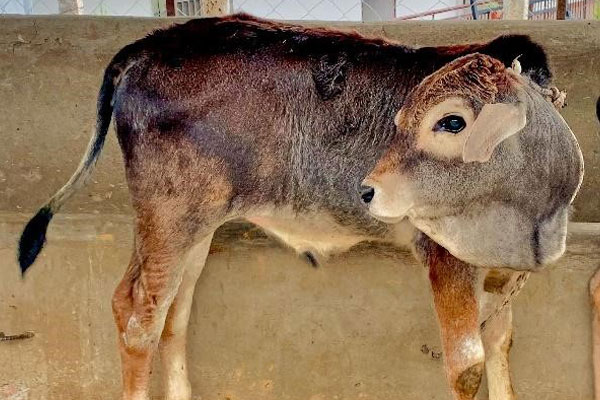 Hanu, one of the youngest calves, was born completely blind. The care of these sevaks has ensured that he is now learning to make his way around even without sight. The sounds of Veera Hanumana, an energetic and peppy bhajan sung by Diyaji, sends him running straight into her arms because he knows cuddles await him on the other end. Even though he’s never witnessed his siblings jumping around in excitement, the joy of being loved has him doing the same, bounding around the gaushala freely.

The gaushala today houses around 25 cows. A while from now, once the last of the calves have been weaned off their mothers’ milk, they will no longer be used for breeding or consuming milk. The ashram will be a home for them to rest and graze. They are also getting used to being let loose so that they can roam about freely once the weaning process is complete.

Swamiji says that Sanatana Dharma stands on four pillars – Gau, Gita (Bhagavad Gita), Ganga and Gayatri. Gaumata forms the basis of a way of life. To spend time with her, look after her and care for her is an immense process of purification. It brings about satvikta like little else. 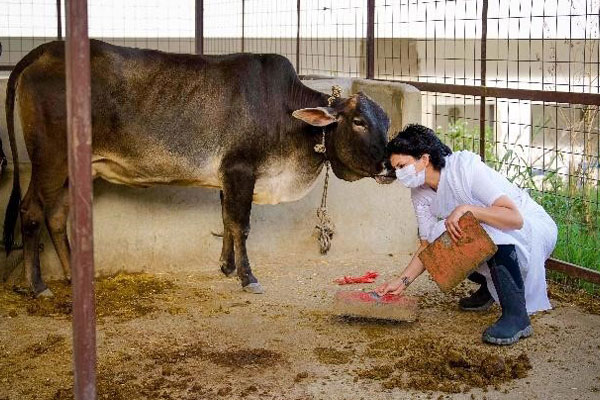 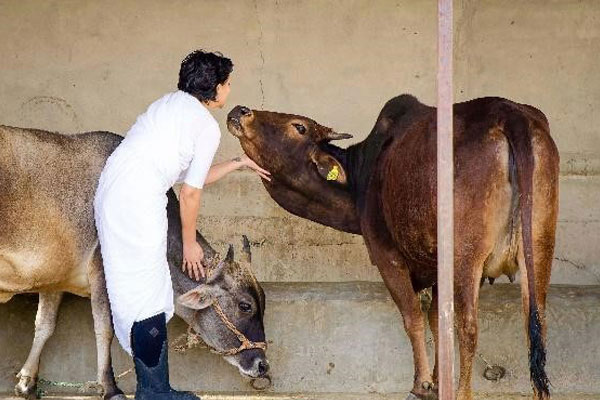 For the sevaks and other ashram volunteers who clean out the gobar (cow-dung), wash the floors and troughs, and bathe gaumata every day, this statement comes to life through their experience.

To serve gaumata is a blessing. A blessing that Bhagwan has given abundantly at Sri Badrika Ashram.