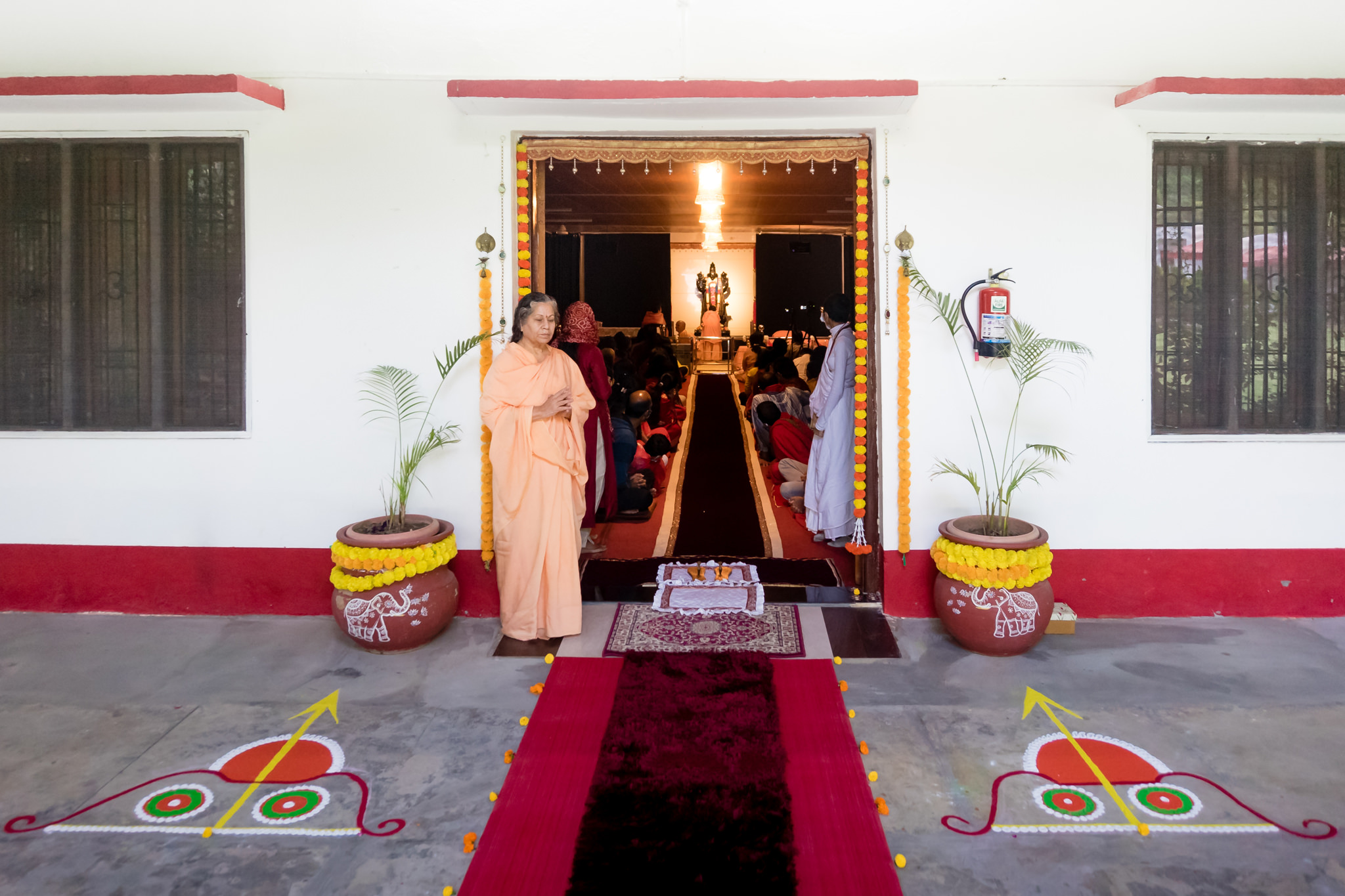 During the eventful days of the Navdurga Sadhana from 2nd to 10th April and Sri Hari’s birthday celebrations on 4th April, devotees were pleasantly surprised to attend an unplanned discourse on Ram Navami by their dearest Om Swami. The best surprises are usually so because they are entirely unexpected. 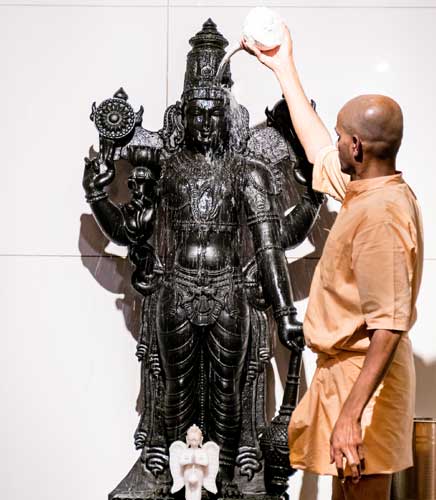 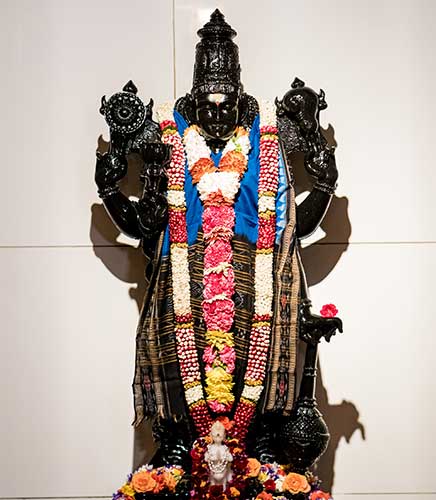 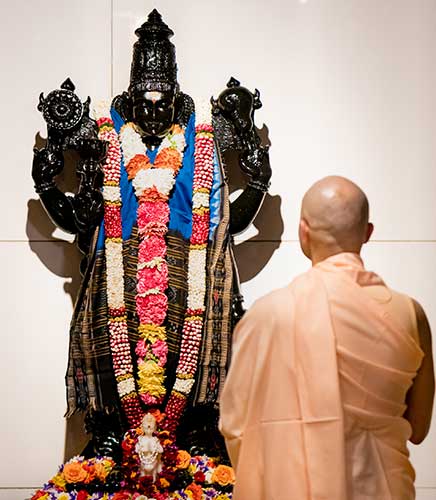 Devotees were ready bright and early, gathered to witness the mesmerising Abhishekam of Sri Hari at 6 AM. An hour later, everyone eagerly welcomed Swamiji into the temple for the morning aarti, and the air was vibrant with their joy, devotion and love. The adults and children were most excited to see Swamiji because it was no less than seeing Lord Rama Himself on His birthday.

Settling down, Swamiji described the righteousness and ability of Lord Rama to remain unruffled in any circumstance. In times of confusion and despair, we can always look at the lives of the Lord in human form and ask ourselves what He would have done in similar situations.

“But don’t ask yourself “What would Sri Krishna do if He was in my shoes?” Swamiji added with His usual irresistible humour, perhaps referring to the mischievous and liberal nature of Lord Krishna. 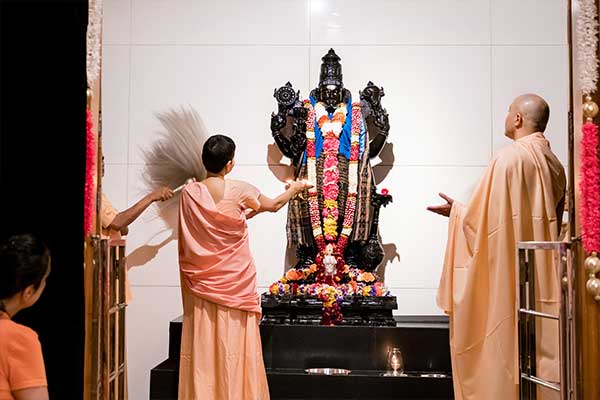 He then narrated a thrilling excerpt and hymn from the Ramcharitmanas about the birth of Lord Rama and Ma Kaushalya’s vision. Everyone sat engrossed, unaware that a historical moment would unfold, a gift from God Himself on His birthday. Gently closing the Ramcharitmanas, the Swamiji went on to share:

“The downside of being God is that He comes on earth to give. His duty is to give. A devotee cannot give God anything. Today is the day of His birth, but what can we give Him? Nothing!”

What Swamiji said next caused the entire temple to erupt with joy and disbelief:

“But, He can give us something, right?

I wondered, ‘What can God give you on this special day?’ So, I thought that one by one, everyone will queue up and enter the garbhagriha (sanctum sanctorum) today.”

As the crowd struggled to grasp the reality of this moment, Swamiji, thinking aloud, designed how everyone would get a personal time of 5 to 7 seconds with Sri Hari, offer their pranams, and touch His lotus feet if they so wished. Given the rarity of the occasion, Swamiji light-heartedly suggested that the devotees could offer one thing to the Lord, something they want to give up and ask Him for one thing in return. 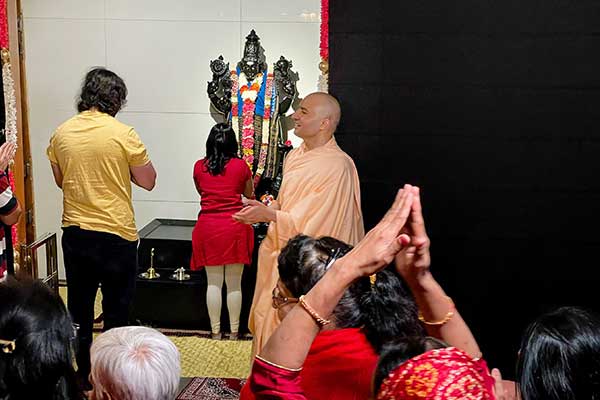 And so, it began. After instructing His disciple to play the beautiful bhajan by Pujya Rajanji, titled Bhaye Pragat Kripala, Swamiji was the first to offer His obeisances to Sri Hari and officially opened the garbhagriha for everyone. As devotees, overwhelmed with joy, devotion, and some visibly in shock, queued up one by one to pay their respects and meet Sri Hari, Swamiji stood by the entrance to the garbhagriha, lovingly and individually guiding everyone in, as though officiating this momentous meeting between the bhakta (devotee) and Bhagwan.

What a sublime moment for all the devotees, Guru and Govinda together in the same place!

(Both, my Guru and Govinda (God) stand before me. Whose feet should I reverently touch first? My Guru deserves my veneration first as he has been instrumental in arranging this meeting with Govinda.)

For a few precious seconds, each devotee had their private audience with Sri Hari under the watchful eyes of Swamiji Himself – an occurrence never witnessed before. His glorious face wreathed in smiles of welcome, the most bountiful Lord stood there. His lotus petaled eyes wide open as though to look at each devotee keenly. Swamiji had said, “The Lord is here to give.” Rightly so, as each person who left the garbhagriha also had the opportunity to pay their respects to Swamiji by touching His feet. 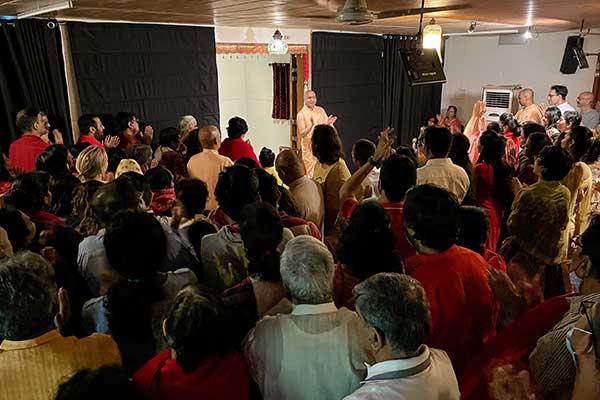 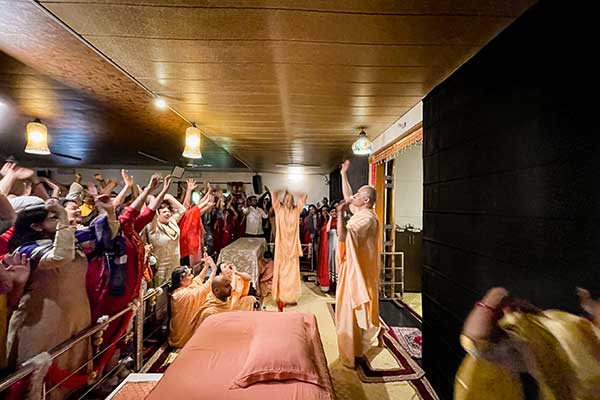 It was a sight to behold – Swamiji clapping and singing, in sync with the exuberant Raghu Swami, a historical and euphoric moment to cherish forever. Waves of devotion engulfed the devotees, and the flow of divine love and joy was palpable.

The feeling that day is best described by what Swamiji once shared about three years ago:

It was a moment in love – a love which may always help us remember that the presence of Sri Hari in our lives surely means that Divine grace will never cease to flow, no matter what. 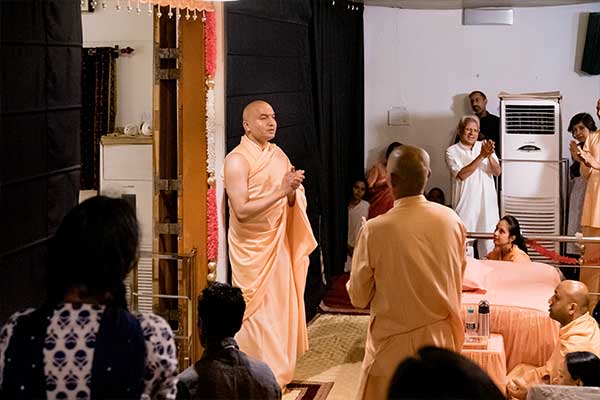 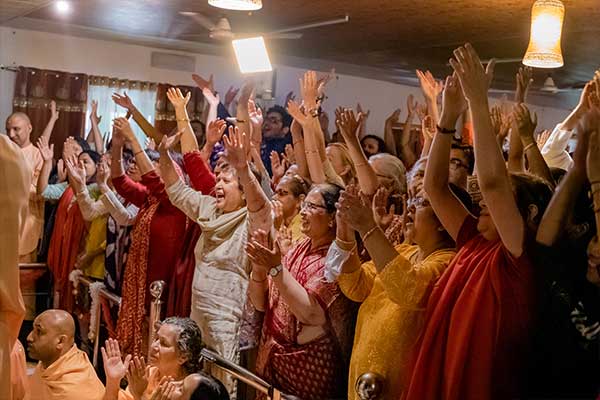 As the sun rose higher in the sky, the atmosphere in the temple became electric; everyone danced, sang and clapped along with Swamiji. At the end, closing the garbagriha, He made His way out, leaving everyone spellbound, drunk on divine love and almost struggling to believe that what just happened was not a dream.

All Glories To Sri Hari!