Wally, the ashram dog, lay sprawled out, fast asleep. His tail flicked away a fly in his sleep – an automatic, involuntary movement. The fly, a lone being, buzzed around indignantly.

Beyond this little play, the gates slid open and an ashram volunteer walked out. Turning to survey the view before him, he smiled in satisfaction. The roof had been raised, the bricks for Swamiji’s kund had been placed. 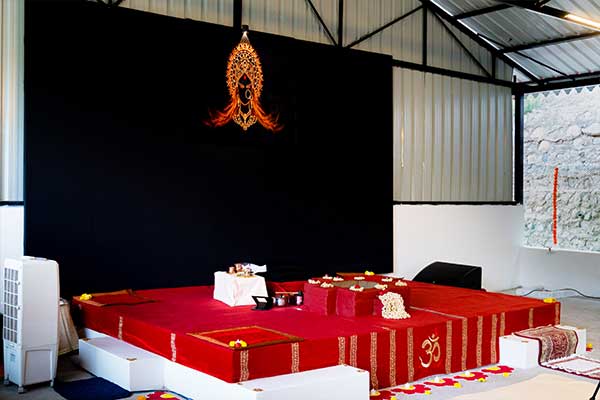 32 more lots of bricks for the devotees, and it would be done. The stage would be set for the first ever yagya sadhana at the ashram.

And unlike Wally’s tail flicking mindlessly at the fly, what unfolded over the next nine days would be the epitome of mindfulness – the pinnacle of focus and a lesson in true-blue sadhana. As much as was humanly possible, anyway, the volunteer thought, as he made his slow way back to the ashram. We aren’t Swamiji.

That we certainly aren’t.

Ten days from April 2 – 11, Swamiji led mesmerized, even overawed, devotees through eight yagyas, one mahayagya and a bonus yagya on the morning of the 11th. The Navdurga Sadhana showed us that every being who sets foot on the ashram land is intrinsically and inexorably linked to Swamiji and the lotus feet of Sri Hari.

What transpired leaves little to the imagination.

Breathless with anticipation, over 200 devotees assembled in the temple on the morning of the 2nd to receive instructions from Swamiji.

What is the Navdurga Sadhana?

It is the invocation of Devi in Her nine forms during Navratri.

And Swamiji’s instructions for the invocation were simple – chant the Navarna Mantra mentally at all times, maintain silence and do it like a real sadhana.

200 devotees, many visiting after a long period, chattering minds and so much to catch up on – was complete silence possible? No 🙂

But as people threw themselves into the sadhana with determination and devotion, sound levels all around the ashram dropped noticeably. Men and women walked about, heads down, gentle smiles on their faces, minds immersed in the mantra. Children were quieter than usual. Even the ashram staff spoke in softer voices.

And in the resulting silence, Ma’s presence rang forth, loud and clear.

Swamiji initiated the first yagya of the sadhana on the evening of the 2nd, by leading a collective sankalpa to attain the Grace of the Divine Mother. 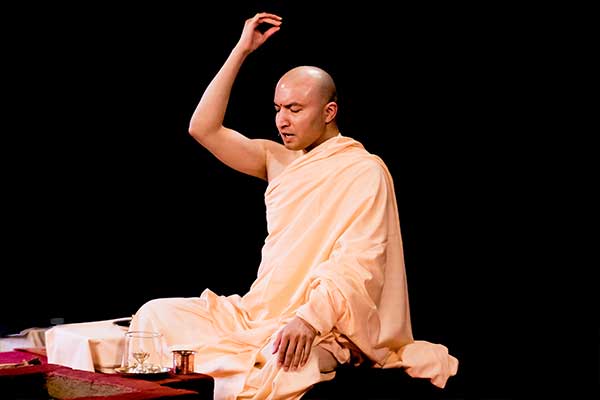 So, it began. The process of the yagya was the same every evening – over 80 yajmanas (patrons) seated at 32 yagya kunds (sacred fire-pit), nearly a 100 seated behind, doing a manasic (mental) yagya, as Swamiji performed the purification process, invoked Lord Ganesha and the Guru, chanted the Svasti Vachan, and invoked the Divine Mother.

This was followed by the chanting of the Ganpati Mantra and the mantra invoking the Devi for the particular day. Then, the Navarna Mantra was chanted, followed by the tantric mantra of the day. The yagya then wound to a close with a final fire offering and the singing of the Sri Hari Aarti.

Every day, as hundreds of voices rose in pitch and fervour, the chants seemed to reverberate all through the yagyashala, all the way up to the skies above the Giri Ganga. The air throbbed, each verse resounding and deep. Every offering to the fire made the flames leap higher, reaching up to the roof, consuming karma, burning away vrittis and leaving behind a smoke trail of self-purification.

In the midst of it all, a vision through the red fires, sat Swamiji. Each evening, his deep voice resounded in the hall as he fed the flames of his yagya, pausing every now and then to explain the significance of a chant or a process to his devotees. 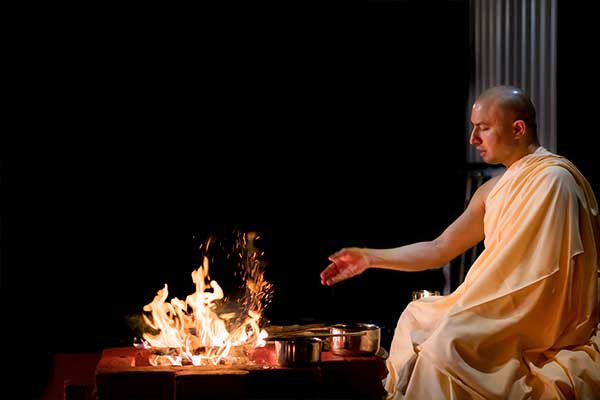 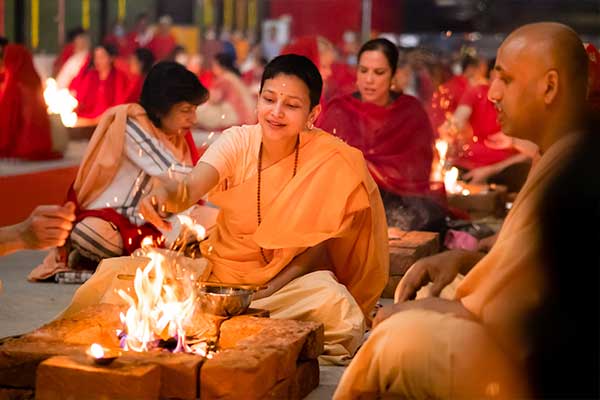 On an especially memorable evening, he spoke about how a yagya is a deeply personal process for a renunciate. That he was able to share it with everyone was the Will of the Divine Mother. That he was able to pause during the yagya to share its significance was even more special. He shared that the only way this could happen was if participants of the yagya had been saints in a previous life. 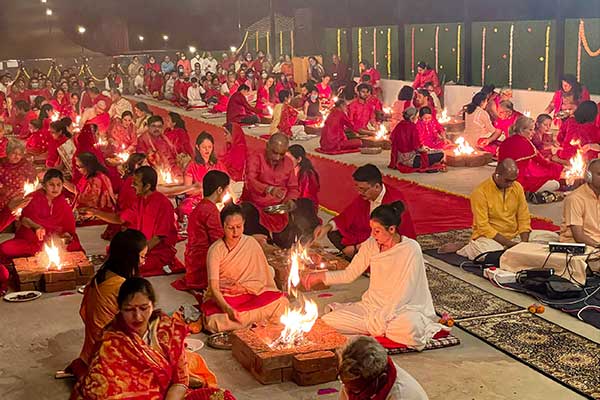 On another special evening, to tears and whoops of joy, Swamiji spoke to the manasic yajmanas, assuring them that they would have the chance to perform a physical yagya on the morning of the 11th. Finance should never be a barrier on the spiritual path.

The culmination of the Navdurga Sadhana was a mahayagya on the evening of the 10th, where Swamiji stated that only the Will of the Divine Mother had allowed for the completion of the sadhana. 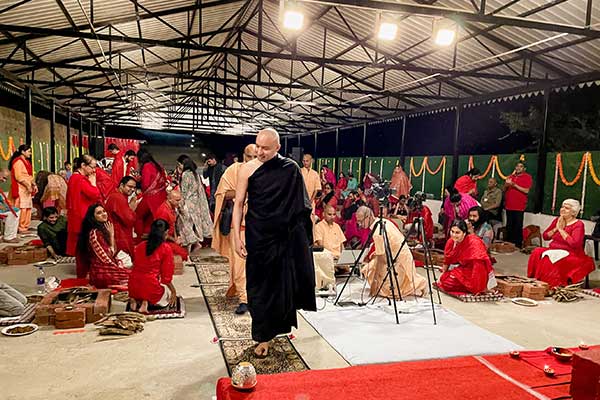 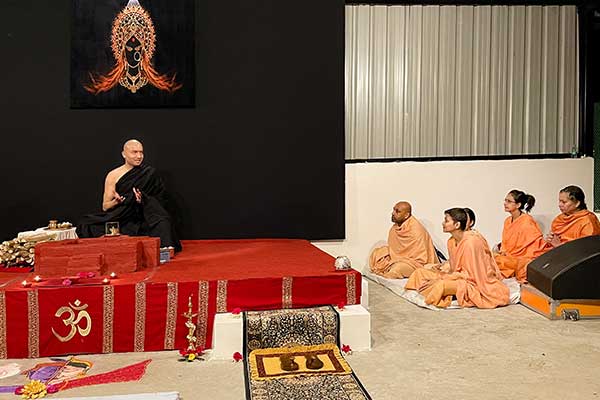 Bringing the event to a resounding close on the 11th, he graced the yagyashala in black robes as he walked in at 5:15 AM. Eager mansic yajmanas had taken their places at the physical kunds. To everyone’s delighted disbelief, Swamiji performed the yagya of the Lalitha Sahasranama.

Stating categorically that this was the first time he was performing it in front of somebody, He went on to share that on this very day, 12 years ago, he had been given sannyasa deeksha. With this revelation, a very special morning for the devotees had just become one they would never forget.

The Navdurga Sadhana was the first of its kind at the ashram. With the 16-night Sri Suktam Sadhana already announced by Swamiji to begin on the night of Diwali this year, one can see the fruition of the promise that Swamiji made on the 4th night of the sadhana – more and more sadhanas at the ashram.

And indeed, this event seems to mark the dawn of a new era for those in Swamiji’s world – one filled with more self-purification, more solidification on the spiritual path and of course, more sadhanas.

If there was any doubt about Sri and Hari, and their presence at the ashram, every single one of those would have been dispelled during the course of these nine days. Ma was there – Her presence a vital, breathing force.

She walked, hand in hand, with those who sought Her out and those who didn’t. She scattered Her fragrance in the lanes of the ashram, rose and sandalwood rising in tantalizing whiffs. She rose in the fiery flames of Her havan, skittered across in the chants of Her names, and bloomed in the hearts of Her children, coming to life in a way nobody had ever experienced before.

It was Her world. We were simply living in it.

This is the advent of the Devi. And it marks just the beginning. 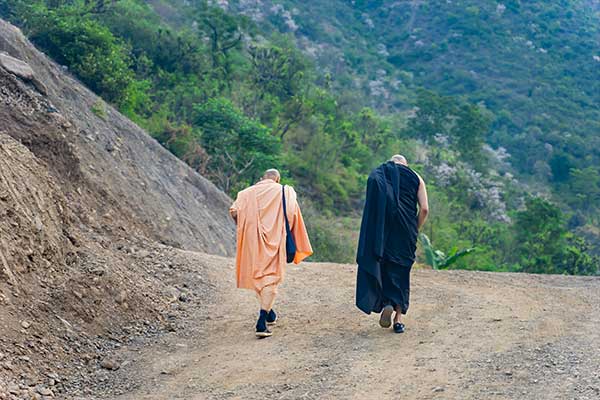 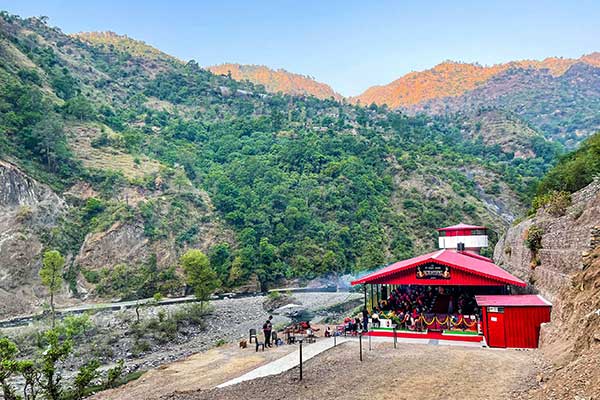 To mark the volunteers’ relentless work over the nine days, an impromptu celebration took place in the dining hall with Matarani, Shamta Ma and Vinny Didi cutting three cakes. Much to the delight of the volunteers, the ashram admin gave away Sri Hari’s vastras as a blessing. As Swamiji put it, their efforts played a major role in the success of the event, which was executed with clockwork precision. 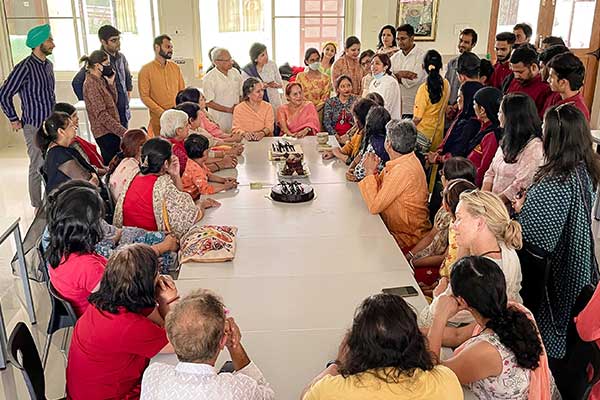 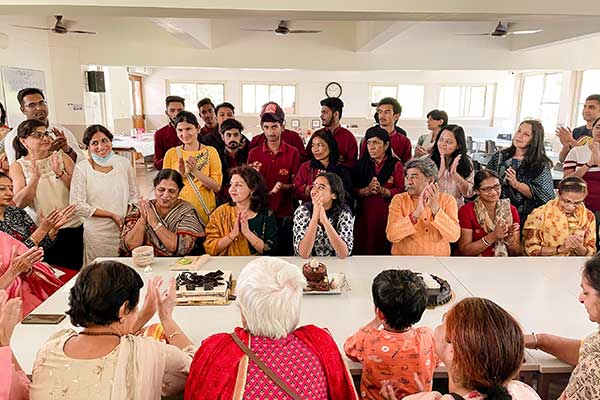