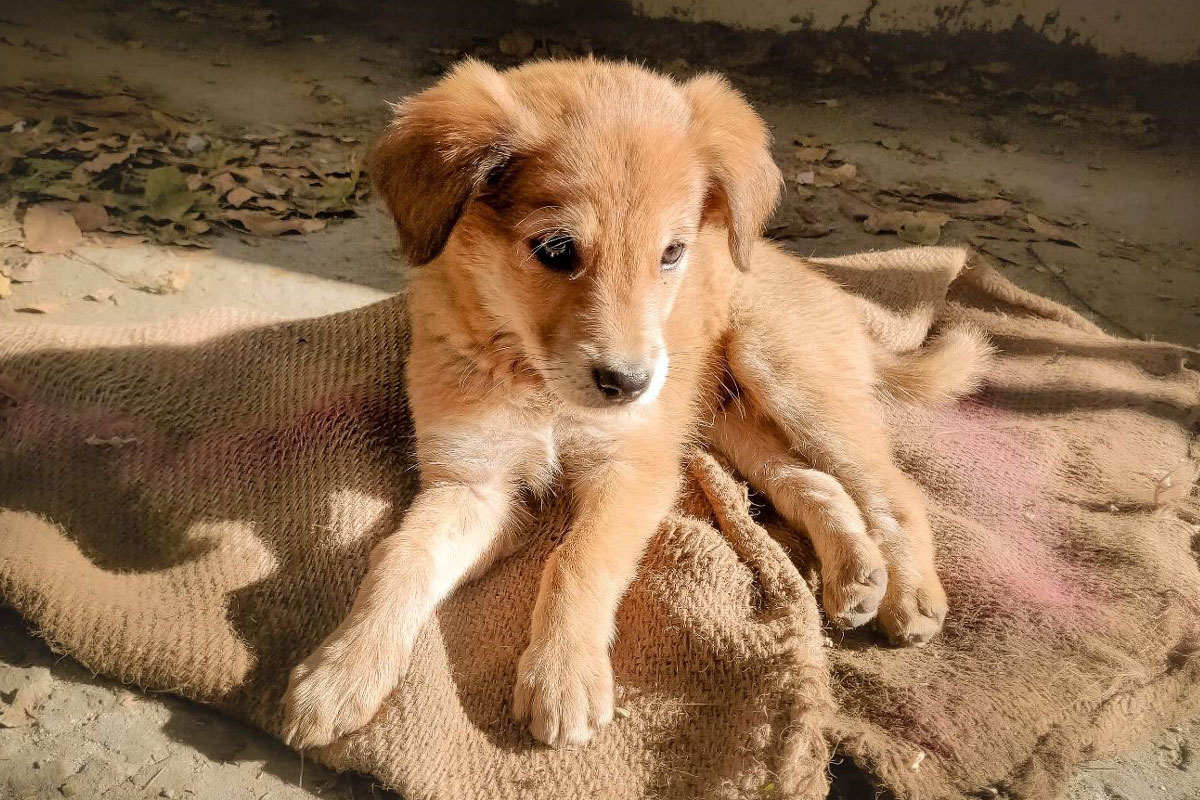 It was the auspicious evening of Ekadasi (eleventh lunar day of each of the two lunar phases) late last October, when amidst the divine sounds of the conch shells, temple bells, and the singing of the Sri Hari Aarti, there was another divine miracle of nature unfolding simultaneously, not far away on the premises. In a small, cemented enclosure opposite the temple compound, a golden brown native dog, who goes by the name of Julie aka Ju’, gave birth to a litter of six adorable puppies.

It was astounding to witness how at every turn, the grace of Sri Hari protected these blessed puppies and sheltered them from every kind of danger; animal, human, elemental, or otherwise. Through the harsh chilly winters, stormy winds, and torrential rains, they remained safe and warm, being fed and taken care of at all times by loving human hands.

As the fur balls huddled together, one on top of the other, basking in the warmth of the morning sun, there was one amongst them whose personality shone uniquely. He had soft walnut brown fur with deep, bright eyes shining like a wise sage, a faraway, dreamy look in them, as if contemplating the mysteries of existence, whilst his siblings snoozed around him blissfully unaware. It was quite evident from the start that he was no ordinary soul!

It was soon decided that all the puppies were to be given up for adoption to loving homes after they’d spent an optimal developmental period with their mother for at least 8 weeks. 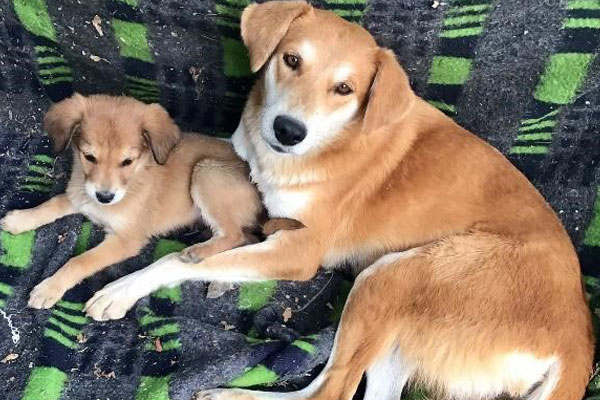 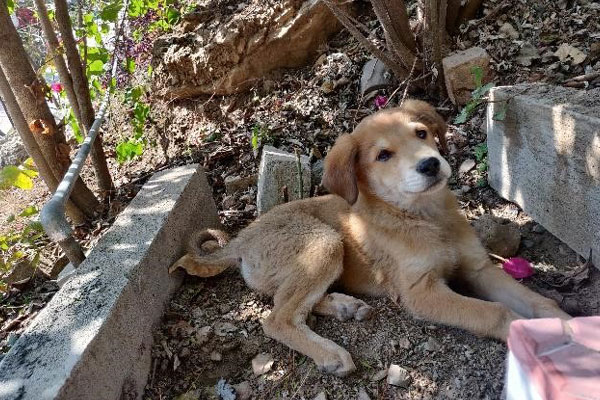 Finally, the heart-breaking day arrived, and one by one they were all handed off to their new caretakers. It was an emotional moment as the sweet brown puppy, who was later aptly named Wally, for in many ways, he looked more like a Walnut hued baby Wallaby than a dog, was sent off with one of his brothers, with many hugs, kisses and puppy treats, to a nearby village located in the hills above the ashram.

A few days after they all had left, the ashram felt desolate and empty.  Ju had a lost, broken look in her eyes as she searched for her children in vain. That night felt colder and darker with a glimpse into the ephemeral realities of life and nature; of attachments, inevitable separation, and impermanence.

The very next morning though, a surprise visitor awaited. We couldn’t believe our eyes when we saw Wally standing in front of us in the enclosure, wagging his tail happily! It was astonishing how such a small puppy, barely a few weeks old, had managed to walk back in the night through the treacherous mountains and forest trails, in the peak winter chill of December, and found his way back to his mother and the ashram.

The family was informed, and he was taken back to his new home again, but relentlessly he kept returning, again and again, overjoyed each time to be reunited with his mother. After the third time, the news of the intriguing puppy returning like a boomerang to the ashram, reached Swamiji.

Considering the matter carefully from all angles, a new loving home was found for Wally in Rajgarh, far away from the ashram, and he was to leave soon. However, the endearing image of Wally playing with his mother lovingly in the sun, with his bright, beseeching eyes, played on Swamiji’s mind and tugged at His compassionate, kind heart!

Swamiji’s love towards all sentient beings presented itself during the Bhagavad Gita discourses streamed live in December. He was expounding on the true meaning of ‘Sātvik Daan’ or charity. He explained how in essence, one must consider the time, place, and worthiness of the recipient before donating and not just put it blindly in a temple hundi or offer to a priest, myopically considering those to be the only forms of pure charity.

Unexpectedly, Swamiji went on to mention that thoughts of Wally had been on His mind, constantly the last few days. With great tenderness, He spoke of how this being’s soul must have the deepest connection with this sacred land, for him to be returning with such desperation repeatedly! It was a golden moment in time when with great mercy and compassion Swamiji announced that He had decided that Wally would be staying on in the ashram and it would be his home henceforth. In His eyes, innocent Wally was indeed a worthy recipient of charity and divine refuge!

It was a time to celebrate the victory of the little puppy, who with his perseverance had bent Divine will in his favour, winning Swamiji’s heart and the grace of Sri Hari. 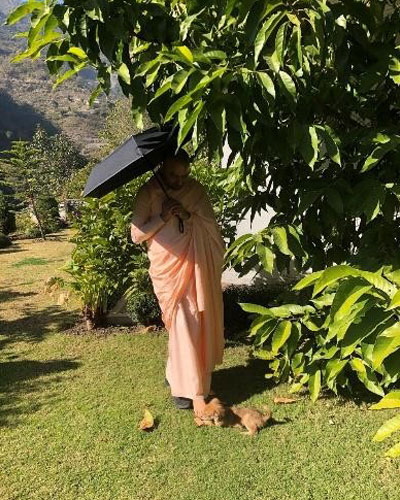 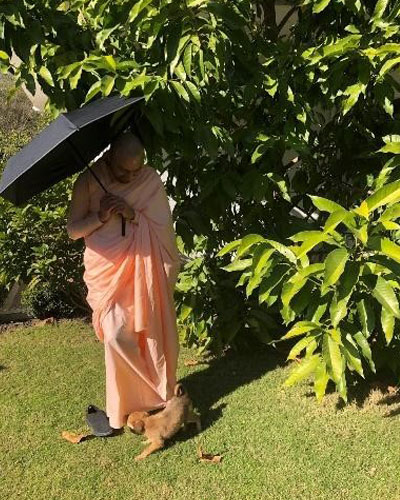 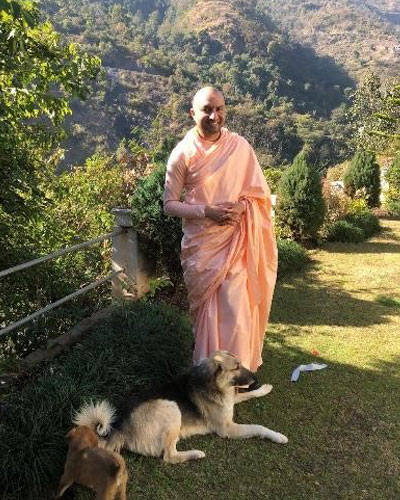 Wally shares a special bond with his Divine saviour and loves to play with His feet, nipping and tugging at his robes with the guileless innocence of a child. Swamiji too wholeheartedly joins in the delightful fun ‘n’ games; blessing and lovingly feeding him delicious treats with His own Divine hands.

Recently, 4-month-old Wally went through a trial by fire, as he battled for his life with a viral illness that sent him into a critical state.  However, the brave little warrior didn’t give up. He was given lots of medical care and love, and finally, with Swamiji’s special blessings and mercy, once again, he pulled through with a renewed spirit! 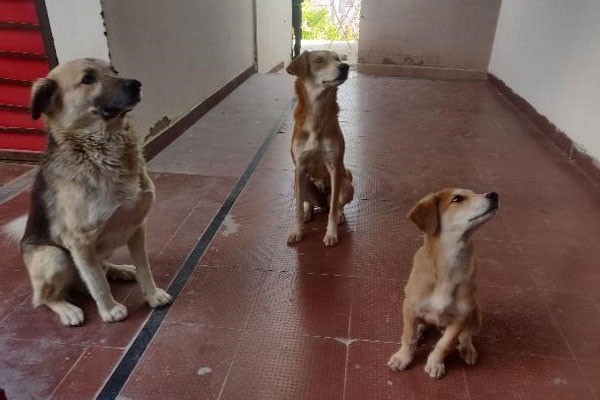 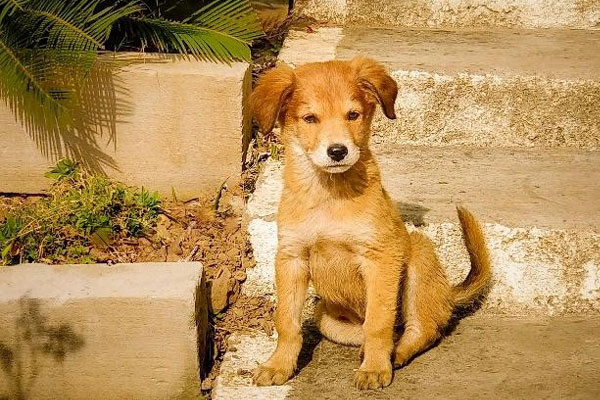 We are truly grateful to have this bonny bundle of joy running around the heavenly ashram gardens, spreading joy and laughter with his lively presence. He has won many hearts with his loveable, playful ways, showing us simply, what divinity in action looks like!

No matter how learned or religious we may be, until we feel the pain of other sentient beings, we are all alike — self-centred and self-concerned. And when the truth dawns, you realize that we still are all alike — eternal and divine. Only the perspective changes. Before realization, you see bodies, differences, and outer appearances. After realization, you see souls, similarities, and the inner essence.
You see God in a dog, then in flowers, in an ant, in everyone. Every time. For, that is the  truth indeed.”
– Om Swami