“She is Jagat Janani. She is your Mother. And the only way to Her is through devotion and humility.” Om Swami

The only Vedic hymn that is used to invoke the divine feminine energy across all five branches of Sanatana Dharma.

The one sadhana (disciplined and dedicated spiritual practice) of Divine Mother that can be done both as a daily ritual and an intense practice.

The most powerful Vedic Sadhana of Mother Goddess.

Invoke for me, O Agni, the Goddess Lakshmi who is radiant like gold, beautiful yellow in hue, adorned with garlands of silver and gold, magnanimous like the moon and an embodiment of wealth and prosperity.

First introduced by Swamiji in His book The Ancient Science of Mantras, the Sri Suktam Sadhana, at its best, appears daunting – 960 days of daily chanting followed by 16 nights of the culminating sadhana to invoke the Goddess.

Even for an ardent seeker on the path, this process requires tenacity and patience. What then of the numerous devotees scattered across the globe with various work and home commitments? Even with the best of intentions, how can they practically work out such a huge undertaking?

In November 2021, Swamiji broke all inconceivable barriers towards this sadhana with a single breathtaking announcement: We will do the Sri Suktam Sadhana, starting Diwali 2022, for 16 nights.

Which meant that 960 days of preliminary chanting was eliminated in one fell swoop.

All that remained was the final sadhana – 16 nights of chanting, one hymn of the Sri Suktam per night, and 1000 chants of each hymn, followed by a morning yagya(fire offerings); 16 nights of blissful worship, devoted to invoking and summoning Mother Goddess for a joyous and meaningful journey on this planet.

To make it simpler, Swamiji would be guiding the devotees through the yagya while performing it Himself. To make it even simpler, He expounded on the 16 nights of the sadhana, breaking it down to its minutest detail in His longest-ever blog post, so that all one needed to do was follow the instructions to the letter.

The only thing He left to devotees was their own willingness, sincerity and dedication.

And across the world, seekers rose to the occasion magnificently.

They recognized this opportunity for what it was: through the sheer power of His penance, one of the planet’s foremost yogis was offering seekers a once-in-a-lifetime chance to experience the boundless grace of Divine Mother – with minimal effort on their part.

In the months preceding Diwali, as anticipation mounted, the ashram team worked tirelessly to bring about a surreal experience to every participant of the sadhana – the first of its kind, a time stamp in current history. 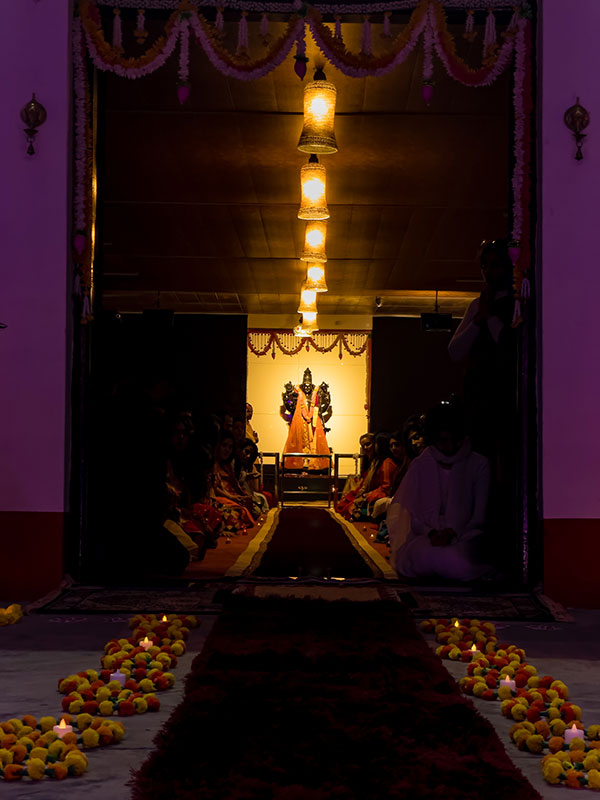 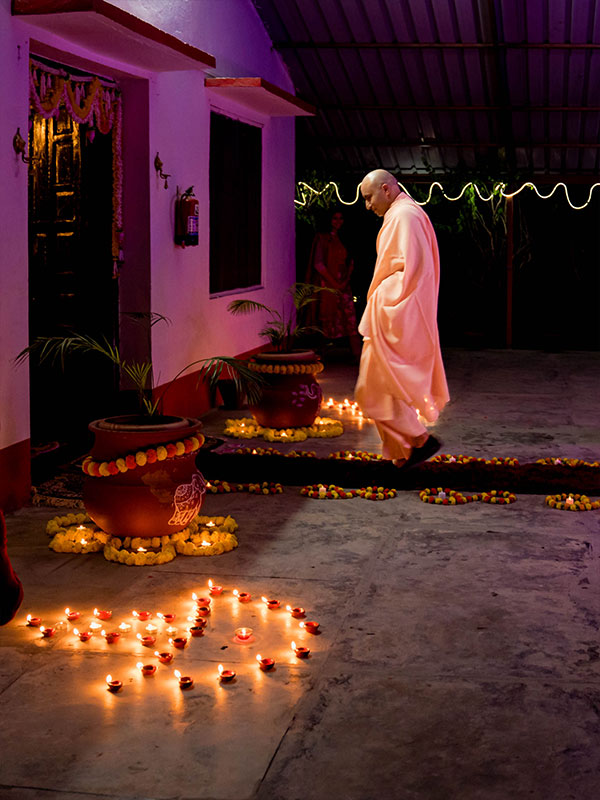 On a cold and delightful Diwali night of October 24, 2022, the ashram was packed to the brim. The temple hall stretched beyond capacity with seekers from all over the world. With a resplendent Sri Hari looking on, Swamiji, looking exactly like Mother Divine, initiated the sadhana.

“The trust, faith and love you give me, remember that it won’t be fruitless. In my own time, at my own pace… I will do what I have to do.”

For an eager seeker, there could have been no bigger blessing. With these beautiful words echoing in their ears and hearts, the sadhaks threw themselves into their sadhana.

1000 chants of a hymn in the Sri Suktam involves 10 rounds on a japa mala. So, a night of chanting would last between 7-10 hours, followed by the morning yagya at 5:15 AM, which was another 90 minutes – no mean feat.

Yet, some sadhaks took upon themselves the challenge of 10 rounds with fervour, discipline and dedication. Others opted for 3,5 or 7 rounds of the hymn, while still others opted for 1 round; 108 chants.

Ultimately, as Swamiji stated on the first night, what mattered was the quality. “Certainly, the number of rounds matters. But what matters more is how you chant them. If you call out to Divine Mother with all devotion and humility, even one round is enough.”

O Agni! Invoke for me the Goddess who will stay by my side and bless me so I may acquire the material wealth of gold, cows, horses and attendants.

The morning yagya, otherwise intimidating due to the number of ingredients and the necessity for firewood, was now simplicity personified – an Om Swami trademark. A sadhak present in the ashram could either pay for a physical yagya or perform a manasik yagya. 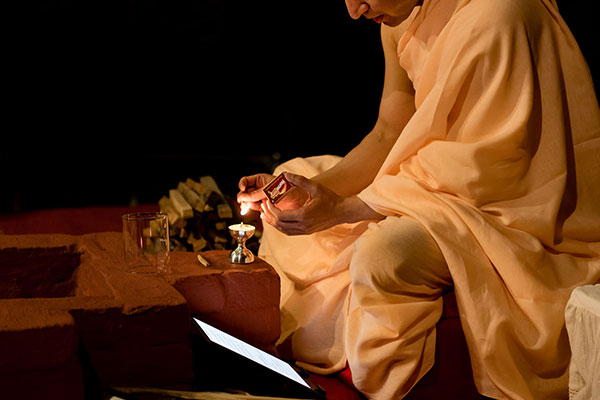 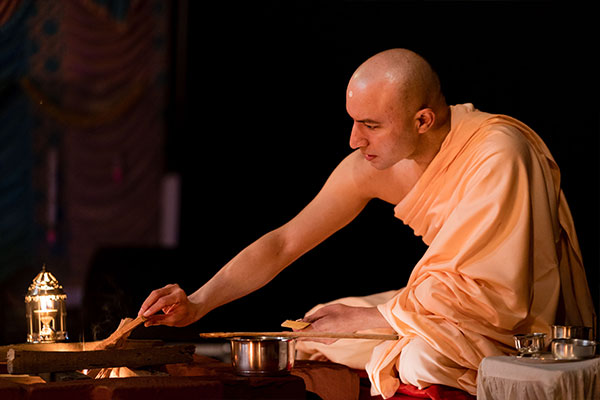 And for other sadhaks around the world? The brilliant solution was at once historic and awe-invoking: perform the yagya virtually on the Sadhana app. All they needed was a smartphone, the app and a stable internet connection. And if this was not enough, they could also become virtual yajamanas (ritual patron in a fire offering), contributing to the cause of Sanatana Dharma, and receive the holy ash from Swamiji’s yagya kund as prasadam (consecrated offering, returned to the devotee after the Divine partakes of it). The yagya would also be telecast live on os.me.

I invoke Sri of the lustre of burnished gold, beautiful like the lotus She’s seated on, the ever smiling, benevolent, Mother Divine who is the Goddess of prosperity, an embodiment of Absolute Bliss, who is blazing with splendour. She grants the wishes of her devotees.

Night after night, day after day, Sadhaks (spiritual aspirants) sat down to chant and perform yagyas, praying fervently to Divine Mother to grace them with Her presence. The Sri Suktam Sadhana is specifically known to bring about material abundance in the life of a seeker. On the very first day, however, Swamiji made His feelings on this clear.

“In my opinion, the only thing a seeker should ask of Divine Mother is Her grace. For, everything else falls under this umbrella, anyway.” 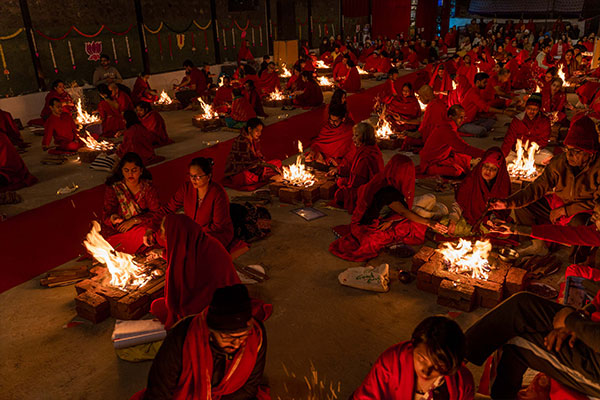 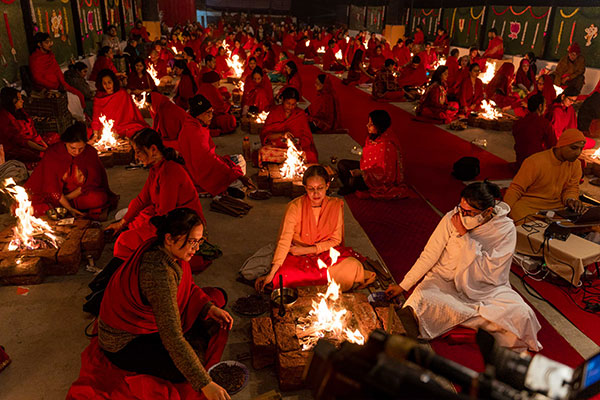 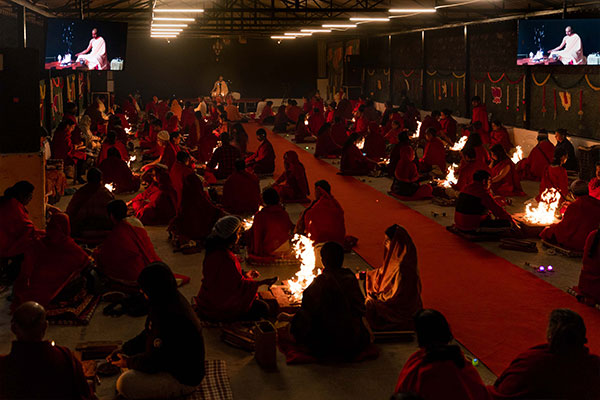 With Her name on everyone’s lips and the hymn reverberating through the collective consciousness, the very air of the ashram seemed to change. The yagyashala (place where several priests/ seekers can sit and perform oblations) seemed not of this world, but of a moment from times gone by- a time where siddhas (a person who has achieved spiritual perfection) of yore sat by the sacred rivers and with great devotion and love, chanted Vedic mantras from dusk to dawn.

The beautiful Himalayan mountains silently emanating their joy and love, the birds flying high in ecstasy, the delighted gurgling of Giri Ganga, the bracing cold of the early mornings on the walk down to the yagyashala, the hypnotic Sri Suktam hymn playing in the shala – it all portended the transformative power of this spell-binding sadhana.

I seek refuge at the lotus feet of the Goddess who is as beautiful and bright as the moon, who blazes with illustriousness, who is adored by the gods and exceedingly munificent. May my misfortunes end. I invoke thee.

The morning yagya followed a simple routine – Swamiji would walk into the yagyashala at 5:15 AM IST and take a seat on His aasan (seat). He would then speak a few words of encouragement to the sadhaks, reminding them that when the night seemed long and the number of rounds interminable, they need only remember that what they had undertaken was no small feat.

All they had to do was take it one night, one round, one chant, one moment at a time. 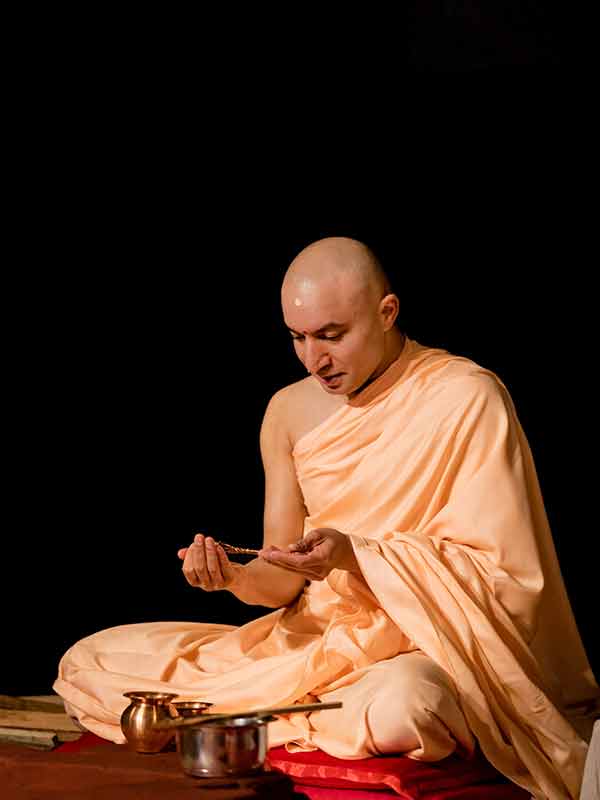 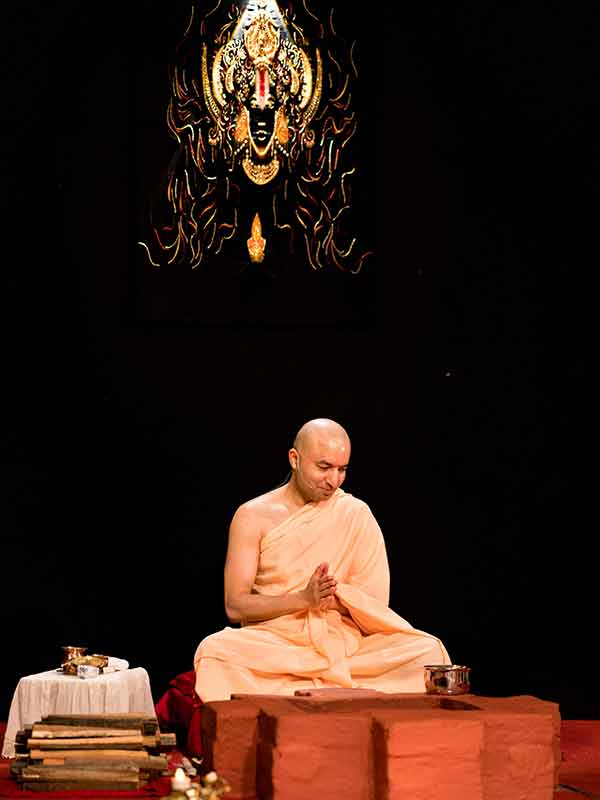 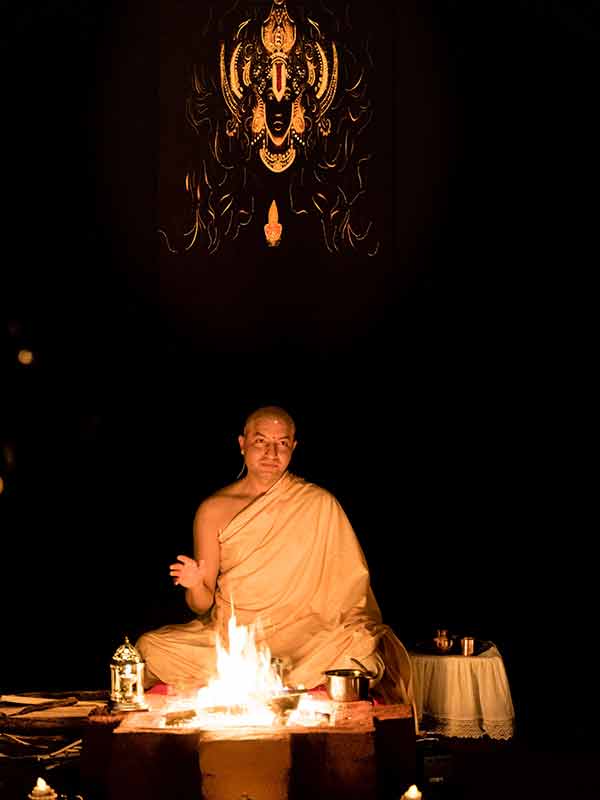 He would then lead the sadhaks through the preliminary purification rituals before invoking Lord Ganesha and calling upon the siddhas of the lineage who were present in subtle forms all through the sadhana.

This would be followed by 108 ahutis (oblations) of the day’s verse. The yagya would then wind to a close with 53 mantras extracted from the Sri Suktam, 15 verses from the Lakshmi Tantra and 15 verses of the Mahapurusha Suktam. 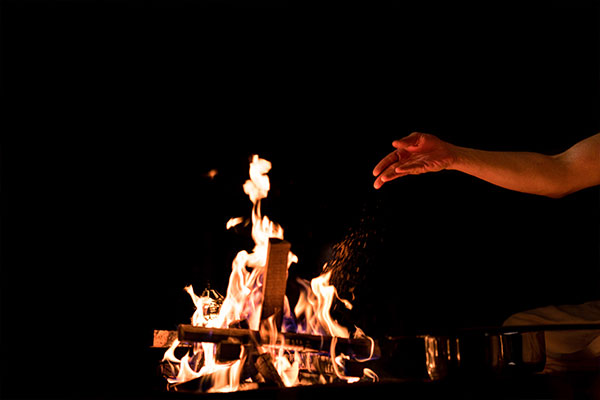 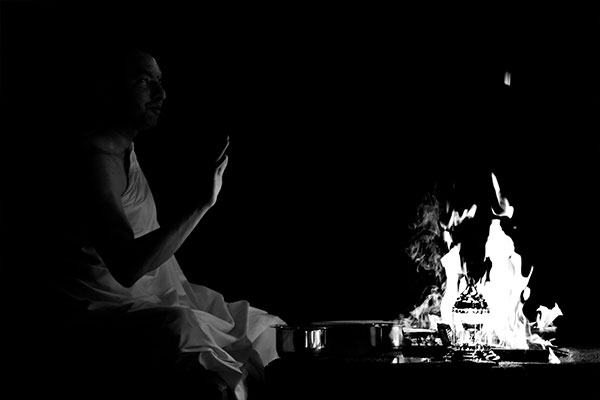 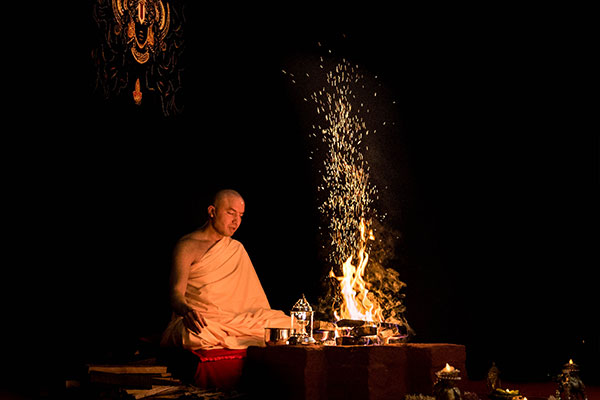 The chilly mist wafting up from Giri Ganga, the rhythmic and bass tenor of Swamiji’s voice as He chanted, the fiery red fires that leapt and swayed to the call of over 200 sadhaks, the moving, incredible stories that Swamiji narrated of Ma Lakshmi asking Lord Vishnu to invoke verses from the Sri Suktam so that She would remain by His side forever; of Lord Narada, one of Lord Vishnu’s greatest bhaktas (devotees), setting out to prove His might to Lord Vishnu and cursing Him as a result; of Lord Brahma and His attachment to His son Vashishta; of Lord Parashurama holding on to His aged and injured body as He waited for His son Ved Vyasa to show up; of Ved Vyasa’s attachment to His children eventually resulting in the revival of Sanatana Dharma, of Lord Ravana eventually becoming the king of Lanka, of each rishi who awakened a verse of the Sri Suktam, and so much more – they all combined to bring to life an ancient time.

It seemed like the Vedic era had arrived in the 21st century.

I invoke Sri, Mother Divine who’s the supreme controller of all beings, who can be perceived through heady fragrance, who is beyond defeat and threat, who is ever virtuous and abundant.

Back then, rishis (sages) sat by the river and imparted knowledge to eager seekers, over fire rituals.  This knowledge would thereafter be shared by the rishis’ disciples, either in written form or orally.

This passed-down knowledge eventually became the scriptures we know today and the people who imparted them, the avatars of the Lord.

That, Swamiji said, was exactly what was transpiring here. History was being written now, over these golden flames and brick-red fire pits. Centuries from now, this moment in time will have been captured as an epoch in the resurrection of Sanatana Dharma.

16 long life-changing nights later, the sadhana wound to a close on the morning of November 9, 2022.

“Devotion and love is the way to Divine Mother’s grace. Ego, lack of humility, mechanical chanting – these are barriers on the path. If one were to live a life of devotion, like Lord Narada for Lord Vishnu, nothing will shake you. You will weather every storm.” – Om Swami

The entire Sri Suktam, once awakened, was chanted by Lord Vishnu, completing the sonic energy of Mother Divine. 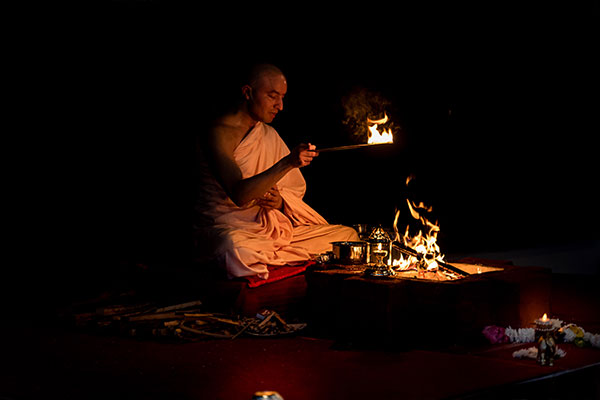 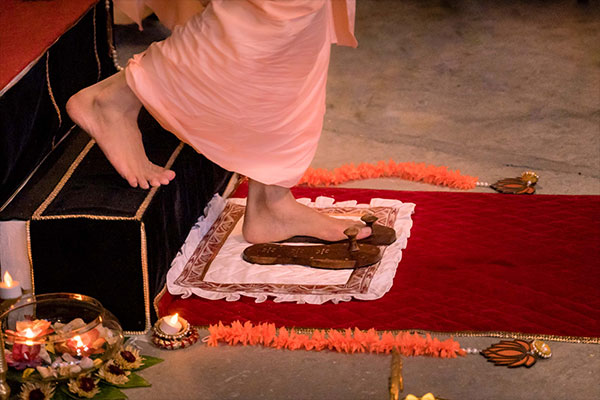 This was the energy sadhaks experienced on that final morning, a memorable one where they laughed, smiled and chanted along with their beloved Master. As the sun rose over the mountains, Swamiji chanted the Sri Suktam, invoking Ma Lakshmi, who is verily Lord Vishnu Himself.

O Jataveda! Bring to me the extremely benign Lakshmi who is reddish in complexion, who dwells in lakes and who possesses the Moon’s brilliance and gold in abundance.

The human mind is not capable of grasping extraordinary divine grace – for grace operates beyond the realms of the mind. But grace it is  that has been sprinkled on planet Earth, as this historic and potent sadhana saw the participation of nearly 7800 sadhaks all around the world, with more than 7500 people making use of the Sadhana app.

In a continuation of the same divine grace, Swamiji announced the Sri Suktam Sadhana once more for 2023 – this time, in the sanghar tradition, one usually performed by sannyasis (religious mendicants) alone. Breaking all conceivable barriers once again, He said that whoever participated could wear the ochre colour during the sadhana and yagya.

Ochre is the colour of fire, of purification. Even wearing the robe is enough to bring forth profound changes in the consciousness of a sadhak. An opportunity like this comes once in a lifetime, perhaps even several lifetimes.

And many are already committed, eager to bask once again in the love and grace of Divine Mother.

O Jataveda! Bring to me the extremely benign Lakshmi of a golden complexion who dwells in lakes, who is the bestower of plenty, who wears a garland of gold, who is resplendent like the sun and abounds in wealth.

And this Diwali, Swamiji did just that. He brought Ma Lakshmi home.